It’s almost here, the longest day of the year. Every year I say I’m going to have a summer solstice party; every year I never do it. Today was the last day of school. After dinner, we went out for ice cream, and after we got back, the kids played outside with their friends til after nine o’clock. Prior to the ice cream and after we got back, I got some garden chores done, including weeding and mulching the front garden, and fertilizing the newer corn and carrots. When I was done, I collapsed in my lounge chair and listened to the kids running and shouting. After the sun went down it got cooler. Sitting in the chair, watching the cornstalks sway, I thought: this is my happy place.

All those years of wondering if I would ever get to sit down outside and relax, instead of chasing toddlers, stopping them from eating rocks and throwing rocks and falling down the steps: now I can.

Yesterday was a cloudy cool day. The kids and I met up with two of my friends and their kids for lunch. That tuckered them out, so much so that the younger two fell asleep on the way home and continued sleeping after we came in the house. I took advantage of that to make a good dinner: shrimp scampi by the Barefoot Contessa. So good, and I had a wedge of Parmesan cheese so I could grate it right on top. For dessert, I wanted to make homemade whipped cream to serve with strawberries, but the cream turned out to be separated and I wasn’t sure what that meant. (It smelled OK.) I need to remember to use or freeze those berries tomorrow. One thing I haven’t been wasting is the lettuce from the garden. I had salad for dinner tonight. 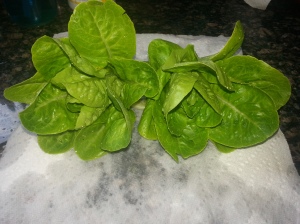 I need to get on track with the budget, but I don’t feel like I’ve bought anything major. I was thinking that I should start my own savings account at my bank. My yard sale cash keeps disappearing out of the drawer I keep it in.

I did spend about $25 at Goodwill today. I dropped off a load of yard sale leftovers. While I was getting it out of the trunk, my younger son starting yelling that he had to pee. I told him I’d take him inside in a minute. Next thing I know, he’s sticking his head over the backseat yelling that he made a mess. “I tried to pee in a water bottle, but I missed.” Missed all over the center console! Every little nook of it was filled with pee. That was cool. After I cleaned that up, we went inside. The kids found a little girl to play with in the toy aisle, so I actually got to look around, and scored some clothes for the fall for my daughter, one shirt for my oldest, and two shirts for me.

I mentioned the other day that I was done with coupons. To elaborate, the main issue is that I just don’t have time. Between the garden, the kids, the remodeling, the PTA, and wanting to cook more, I am out of time. I can’t spend the time that I used to hunting down deals and printing stuff out. It also seems like I throw out the vast majority of coupons. Most of them are for stuff I don’t buy (i.e., processed foods). And now that potty training is nearly complete for everyone, that’s two main coupon items (diapers and wipes) off the list. I can still follow the store deals and sales, but I think the days of stocking up on free mustard and fifty-cent salsa are over. Maybe I just got bored with it. I had been doing it since 2011, after all.

Some quick garden notes. I saw some white spots on my pumpkin leaves and immediately got worried about powdery mildew. But the spots seemed too symmetrical:

Turns out this is called natural silvering, and it’s just something some pumpkins do. Nothing to be alarmed about.

And thank God, because I really want this wittle baby pumpkin to make it!