Early yesterday morning I rented a house on the Eastern Shore of Maryland, for Thursday through Sunday nights. I can’t wait! It feels good to be acting capriciously when normally I plan vacations at least six months ahead of time.

We knew we wanted to go away this weekend, but didn’t know where. First we considered Cape Cod, where I have long wanted to go, but the weather didn’t look good. I was looking at Assateague National Seashore, in Maryland, where you can camp on the beach and see the famous wild ponies, but the campsites were mostly all booked. Only some random weekdays were left. So I started looking at houses in the area, and somehow found this place that looked really nice — right on the water, a dock, an aboveground pool. The price is reasonable (it’s actually a carriage house). So we’ll be able to fish, swim, maybe rent a boat. There is Internet, but no cable or satellite TV. I just want to be someplace different for a while. The last time I was down that way was when my cousin graduated from Washington College in… 1994? We also are planning to drive the hour over to Assateague and check that out.

I was talking to the owner on the phone, and he was describing how to get to the house, and he said, “turn right at the Wawa in town.” Yay for Maryland having Wawa!

So tomorrow I have to do a lot of wash (the house does not have a washer/dryer), buy some supplies such as more sunblock, and otherwise prepare to leave Thursday morning. I need a pet sitter and a plant sitter. My husband and I are excited, and so are the little kids, but my oldest is dragging his feet. He just wants to go down the (Jersey) Shore. And ride the PATCO train. That’s the extent of his summer bucket list. Hopefully he will come around when he gets there. It’s the second true day of summer and his whining is already getting to me. I have plenty of ideas for things he could do, but I have to tread lightly with this kid.

Right now all the kids are mesmerized by a birds’ nest with baby birds that they just realized is inside the playhouse. This has kept their attention for a couple days now.

Yesterday, the first true day of summer, was a good one. All four of us went shopping at Wegmans, where I kept them busy hunting down items for me. They seemed to enjoy it, but we need to get to Wegmans earlier in the day when it’s not so crowded. They were always on the verge of barreling into someone. Later on, we had our inaugural trip to the town pool. This is the first year that I went ahead and got a membership for us, instead of paying by the day. The water felt great, the little kids had a blast jumping in over and over, and my son had friends there to play with. We stayed til around 6, then came home and had dinner at 7:15 (!), and everyone was so hungry they had second helpings (spaghetti and meatballs). My daughter conked out at 8 and the others stayed out catching fireflies til it got dark. I love the long long days! I wouldn’t mind living farther north where it stays light out even longer.

Today, we need to stick close to home and not spend money, in advance of the trip. I’ve got budget stuff to do, phone calls to make, school crap to declutter, and more. There are also supposed to be strong thunderstorms later.

Garden update: I’ve got a yellow squash taking shape, and a second sugar pumpkin. All the compost pumpkins that I thought were growing have instead rotted off the vine. Maybe they didn’t actually get fertilized, or maybe it’s because those pumpkins are trapped in a planter that’s too small. But, now there are two fruits on there that seem to be growing robustly, so we’ll see. I should just do a massive transplant of the whole planter, but I don’t have the energy. I planted some zinnia seeds in a planter on my back steps, and they have sprouted. There are a few more little things I’d like to do, but the oppressive heat makes it hard. I’m thinking that it would be fun to have a small greenhouse next spring. It seems like that would help with growing flowers from seed. 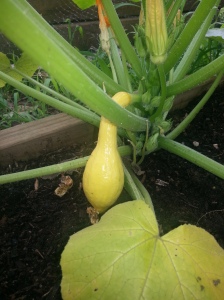