That is not a Harry Potter trivia question.

A plant has been growing in my front garden, popping up in different spots all over. Its leaves looked very much like those of my mums’. I looked it up online, and at first was worried that I had an outbreak of mugwort. Mugwort is apparently one of those nasty weeds with deep strong roots that is tough to eradicate. But upon closer inspection, I think the plant is feverfew. Feverfew is easier to control and may even have medicinal uses. It also should eventually produce daisy-like blooms (another name for it is bachelor buttons). So that’s good news. Whenever something grows of its own accord in my garden, I’m inclined to let it do its thing, since I have a lot of space to fill and not a lot of time to plant, as long as it’s not a destructive weed.

Meanwhile, in the back yard, I’ve spent the past couple mornings helping the pumpkin plants get it on. I’ve had four female pumpkin flowers open so far, so I’ve been transferring pollen from the male flower (stamen) to the female part (I forget what it’s called) with a Q-tip or small paintbrush. In one case, I had to use pollen from the unknown male plants (they sprouted from compost) to pollinate the sugar pumpkins because I haven’t had a male sugar pumpkin flower yet. But I guess it’s all good because that could easily have happened with bees. 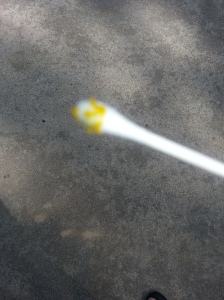 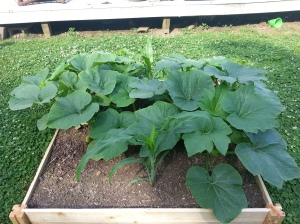 Sugar pumpkins and corn (this photo is already outdated, they are growing like crazy)

This past weekend was crazy busy. Went out with friends Friday night; had two kid birthday parties on Saturday; went out with the hubs on Saturday night, for a little bit; and went to New York City yesterday with my mom, her friend, and her friend’s granddaughter to see Jersey Boys. I think that was the first time I’d been to NYC in eight years. We stopped in the LEGO store, the Met Museum of Art store, and the American Girl fortress of girlish delight, and I refrained from buying anything — but I’d like to bring the kids back, and I can’t promise that I wouldn’t buy them something at that point. Of course, there is nothing in the Compact that says I can’t have a latte at Magnolia Bakery, a delicious tapas lunch, or post-show cheesecake at Junior’s. My mom paid for the bus/tickets package for me and her, which was supremely generous. 🙂

I love the New York of my mind, literary New York, old New York: A Tree Grows in Brooklyn, The Catcher in the Rye, The Age of Innocence, Taxi Driver, Summer of Sam. Real New York in 2015 is not quite the same, but it’s still exciting. The Puerto Rican Day parade was making its raucous way down Fifth Avenue in the early afternoon. We saw the Naked Cowboy, the live Statue of Liberty, and selfie sticks for sale. 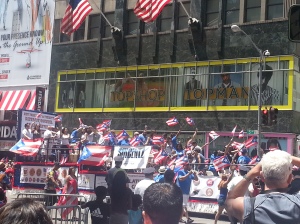 Back home now, sitting on the front porch, watching my kids and their friends carry out some kind of game involving flooding the driveway with the hose and seeing how far they can make the water travel down the sidewalk, where one of them controls the hose and the others station themselves at various points and yell a report on the water’s progress. If they put all this teamwork and focus into something real, it would be impressive.

I’m sitting amongst the yard sale leftovers. Last week I managed to unload some of them, mostly for free — through the Facebook online yard sale, and to some of my friends. I also dropped off a big bag of maternity clothes to the Nesting House. This week they will tell me how much cash they’ll give me for them. Not sure if I said this already, but we did make about $220 on the yard sale, after accounting for the registration fee and pricing supplies. It was a lot of work to get everything out of the house and onto the lawn, but I think it was worth it, if only because the house is so majorly decluttered, especially the basement, attic and garage. Random old headboards, home décor, a crib mattress, toys, tools… gone, gone, gone. This week I will definitely clear the rest of the leftovers out.

My oldest has half-days for the rest of the week, and Friday is the last day! I have no plan of what to do after that!

Hoping to have a financial pow-wow with my husband this Friday. Prior to that, I need to update the budget.

Here are some more garden photos. I don’t think I have posted these yet. Again, everything is bigger than this already. Harvested some lettuce tonight for a salad with dinner. 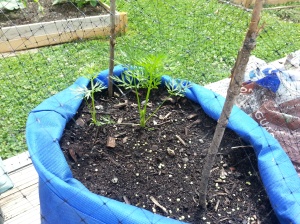 Carrots in the reusable bag

Sunflower (the biggest one) 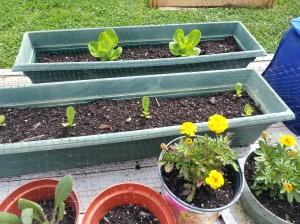 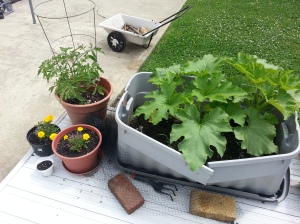 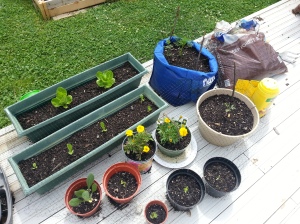 3 responses to “Feverfew or Mugwort?”