Busy week. My oldest has half days every day except Friday. Yesterday (Tuesday), my middle child had kindergarten registration, so I had to pick him up early from his private pre-K for that, then hustle over to get my oldest at 12:30. Spent the morning filling out all the kindergarten paperwork and also getting together tax stuff for my husband, who was off to meet the accountant. Last night was the first baseball practice of the season, at 6 pm. Naturally, my husband drove off to meet up with his friends for St. Patrick’s Day with all my son’s baseball gear in his trunk. Today, I have a doctor’s appointment at 10:15. Tomorrow, I have my oldest son’s parent-teacher conference in the afternoon. Friday, I have a different doctor’s appointment. I guess that doesn’t sound too bad; it’s really the half days that are messing me up. At least twice so far in his school career I have forgotten to pick my son up on half days, so here’s hoping that doesn’t happen again this week.

And the fun is just getting started. Take April 11, for example. 8 am dentist appointment for my oldest. 11 am, Little League opening day ceremonies. 1 pm, birthday party for my middle son to attend. Yeah, I have to reschedule that dentist appointment. Not sure what I was thinking there.

I’m also planning my sister’s bachelorette party and a family vacation for the summer.

But I’m still working on my projects. I’ve got my daughter’s room cleared out and I entreated my husband to rip the woodwork off. Hoping to clean the walls and prime them today, maybe. I bought primer and some paint samples on Monday. On Sunday, the kids and I trekked about a half hour south of here to purchase a brass headboard for my daughter’s bed (craigslist); that will be getting a coat of paint. Thanks Pinterest for the idea! That was an interesting and perhaps illegal ride home, the way I had to configure the kids and the headboard. I really really really want to get her room all done before it gets to be summer weather.

I want to do her room in pink and brown, to match a beautiful quilt my aunt made for her, and then add pops of some shade of blue. 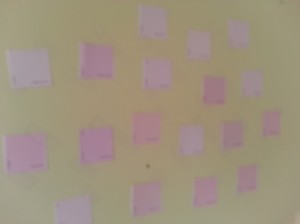 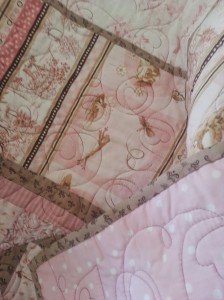 Three tomato plants have sprouted in my seed starter! I need to get some planters for the back yard because planting time will be here before we know it. I’m not even messing with the actual dirt in my yard this year. Too much work. It’s going to be planters all the way.

How about all the other projects?

Swagbucks? Still going strong, up to $20.

Decluttering calendar? Not so much. I am still decluttering, but on my plan. I couldn’t get into what that site had planned for February and March (coupon organizing, meal planning, paperwork decluttering). Maybe I’ll get back into it. It definitely is a useful site and helped me enormously with the kitchen.

Cooking from scratch? Not bad. I tried this spaghetti pangrattato recipe last week, from Smitten Kitchen. It was not the kid-pleaser I’d hoped for — even my daughter wouldn’t eat it — but I loved it. Garlicky goodness.

In yard sale news, I sold a kids’ denim jacket for $4 and the changing table for $10, and the crib is going out the door tomorrow, for $30, hopefully. In clearing out my daughter’s room I came across all the old crib sheets. Sniff. I guess they have to go. I don’t know why that makes me sadder than selling the crib itself. I guess it’s the particular patterns: the fancy Pottery Barn ones I registered for when I was having my first, the flannel now worn so thin; the pretty flowered ones I bought when I knew I was having a girl, finally. And thinking of all the times I had to change the sheets because they were wet or pooped on, in the morning or the middle of the night. To know I won’t be doing that anymore is both awesome and terribly sad.

OK, I took a break there to visit the doctor. Afterwards I stopped downtown and picked up some stuff for dinner (tortillas, limes, beans) at Sara’s Produce, a little Mexican grocery that has quietly been doing well for at least a couple years now. Meanwhile, the Local Market, which I wrote about here, went out of business after a grand total of three weeks. The owners said something like that the sales were way lower than even their worst projections. I have to say that while I didn’t expect it to close after three weeks, I thought its general concept was a little too highbrow to last around these here parts. Another market, McFarland’s, is still supposed to be coming to a different space, soon. Here’s hoping it serves as what I want: a basic middlebrow grocery store with a little more selection than Sara’s.

I also got a “whacked chicken” sandwich from Primo’s for lunch. Yum yummy. You know what’s better than eating chicken-pesto-sharp provolone in bed with no kids around? Nothing.

I just had an idea (ok, I swiped it from the mommy playbook of my friends V. and J. :)) to take the kids to see the new Cinderella movie this afternoon. I’m pretty sure there are theater gift cards here somewhere. I feel like I should take advantage of these half days. So much for painting.

One response to “I’ll Pencil You In”