My first day of the Compact… and I bought something new. D’oh! I completely forgot about the Compact and went into a retail swoon when I saw a cart of massively marked down Christmas merchandise at ShopRite. I love getting Christmas stuff after Christmas. So I bought 9 packages of stick-on Xmas tags that were 10 cents each and a package of cocktail-size napkins that were $0.65, for a total of $1.55. So it was more of a breach of the letter of the Compact than the spirit, but still. I didn’t like how giddy I got over that cart. I actually initiated a conversation with another shopper who came up to it — “Look! Ten cents each!” etc. — and that is quite out of character for me (nervous/shy/don’t like people). So I have about 200 new Xmas tags.  Plus all the ones I bought on sale last year. And in theory I should be giving more experience-based gifts than physical, wrapped gifts if I follow the Compact in the future. Um. Maybe I will give the tags as gifts to other, more gifty people…

I’m just such a sucker for tags, cards and anything texty/graphic. Aren’t these cute? “No Peeking!” Love. 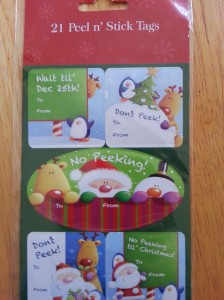 Anyhoo. The other freaky thing about this cart was that I reached for a Barbie, thinking I could give it to my 2 year old in the future, and it was the exact same Barbie that she already has. She only has one thus far. Then, I reached for some cookie cutters in a mesh bag, and they were the exact same ones I pulled out of my baking cabinet the other day when I was cleaning it out. Unused, still in the bag. Ones that someone gave me and I have never used, because I have another set. It was like the universe was trying to remind me to STOP BUYING STUFF, YOU HAVE MOST OF IT ALREADY.

What I stopped in ShopRite for was frozen cauliflower and a rotisserie chicken. Lately I am making peace with the fact that my kids and husband are super picky and that I am not a great cook. So I am focusing on keeping meals simple, easy and somewhat healthy. I cooked and pureed some cauliflower and hid it in chicken broth a la Jessica Seinfeld, added some pieces of chicken and some tortellini, and voila! Something the kids ate rather voraciously. Well, the boys wouldn’t allow the chicken or tortellini in their broth, so they got conchigliette (fancy word for shells) pasta. A good meal for a chilly night. My daughter ate three bowls and picked up the bowl to drain it at the end, God love her. I used to make that meal fairly often but I hadn’t in a while. In fact I used to sneak cauliflower into quite a few things, then got lazy about it. The whole Jessica Seinfeld system is neat if you can make the time for it.

As I always do, I made way too much pasta. So I have to try to remember to make use of the leftovers somehow. As I mentioned, food waste drives me crazy, and I’d really like to see my grocery bill come down.