Wednesday, end of March. Spring soccer has begun, with a chilly game on Sunday for Aidan. Sebastian has baseball practice tonight but we will miss it due to a soccer fundraiser. I’m contemplating lacrosse for Gemma. Yesterday morning there were thunderstorms and it was twilight dark until around 11. Today, still gloomy but warmer. Good day for a walk.

Squirrel babies are being born all over the place, and two days ago one dropped out of my husband’s office ceiling onto a pile of mail on his desk. He brought “Earl” home and he stayed the night in our garage. Yesterday the kids and I took him to a wildlife rescue in Medford, a 30-40 min slog away in traffic. I was sorely wishing my husband had just returned him to the ceiling and his mother. The upside was that walking amidst the fragrant pine trees in the rain inspired me to plug Medford into my realtor.com app to see what came up. Not one but two intriguing, affordable small acreages came up. I’m sure there are reasons that they are affordable, and I’m not really looking to move, but… 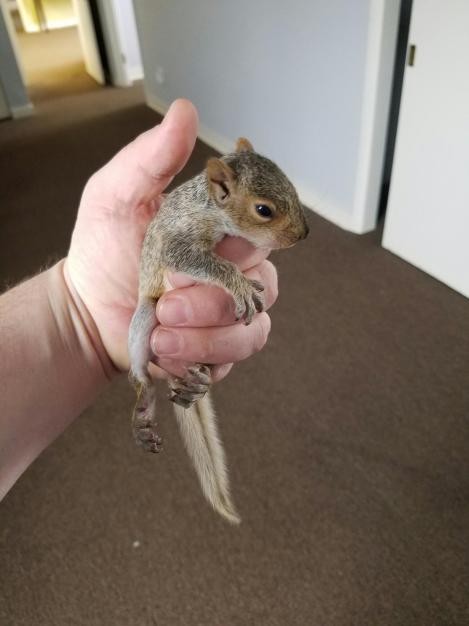 Along the same lines, I’ve been looking at smaller cars, and that may actually happen. If I ditch the van, I could knock my payment down by a $100 a month or more. Test drives today, maybe. Say, the one dealership is not far from those little farms…

I’ve been meaning to write about my progress with eating locally/in season, since it’s been about a year since I read the Barbara Kingsolver book that was so inspiring to me (so inspiring that the name of it completely slips my mind right now). The truth however is that finances right now have dictated a less choosy approach. Finances dictate that I spend time on things like selling clothes on eBay, not hunting down local foods. Acme and Wegmans are what’s getting my business because they’re convenient and they usually have enough organic/humane/local stuff as far as meats, eggs, fruits and veggies to satisfy me. I can say with certainty though that I don’t think I’ll ever buy conventional chicken again, like from Acme. I’m pretty well put off the factory chicken. I get it from Hillacres Pride or the best stuff they offer at Wegmans.

Hopefully in the near future I’ll be able to get back into all that.

Anyway. I’ve been cooking and baking up a storm and feel justified in going out to eat tonight. Highlights include:

—Chicken fried rice (plus Wegmans’ potstickers) with a soy vinegar dipping sauce, on Sunday. So good. Can’t find link to the sauce but it was basically soy sauce, sesame oil, rice wine vinegar, sugar, and I floated some garlic in it. Sesame oil and the vinegar were splurges but now I can do more Asian at home; 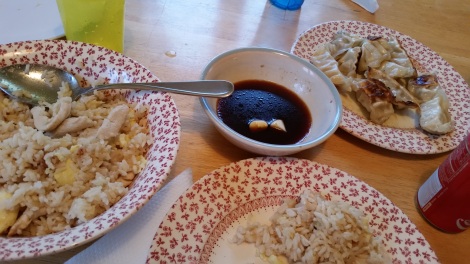 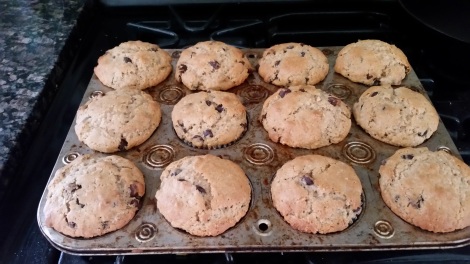 –Homemade salsa. I wanted to use some of the tomatoes that I still have. So I defrosted them and cooked them on the stove with chopped onions, a jalapeno pepper, a green long hot pepper, some vinegar, salt, sugar, garlic, and garlic powder (I can’t find the recipe now). There was a lot of water that had to be strained out. Then it went into the fridge, and later I added lime juice and chopped-up cilantro from my garden. The taste and smell were good but the texture was a little off (still some stringyness from the tomatoes) so I cooked chicken breast in it, in the Crock-Pot, and we used it for hard tacos. Also, I don’t have any tortilla chips on hand so it would have been hard to use it as salsa in any event. Next up for the remaining tomatoes: vodka sauce? 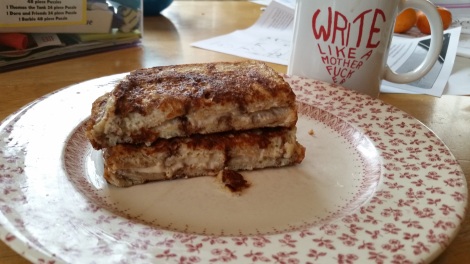 I’ve been eating lunch at home as well, religiously. As far as eating out for dinner, we did order pizza one night last week but then ate at home both nights of the weekend.

Saturday was a town-wide yard sale day in a neighboring town. I’ve been toying with the notion of buying kid clothes at yard sales and selling them on eBay (once I finish with all Gemma’s baby clothes). So Gemma and I trotted around this town Saturday morning and I kept this idea in the back of my mind. At two houses, we did find some boxes of kid clothes, 50 cents per item — at one house, the lady said I could fill a bag for $5, so I ended up with 15 items for $5 = .33 cents each. I can sell these on eBay for $1 each. Of course, because I’m a ninny, I feel bad about doing this, even though I’m going to iron these clothes and take pictures of them and coordinate outfits out of them — basically add value. Not throw them on the curb in a cardboard box. But I feel weird, so when the lady asked me if I had another little one at home (the clothes were smaller than Gemma), I said “yeah” and prayed Gemma wouldn’t pipe up. Gemma is a liability at these sales in other ways — she bought $2 worth of toys and then I ended up getting her Mister Softee, so if I do end up doing this for real, she has to stay home! She loves going to them though 🙂 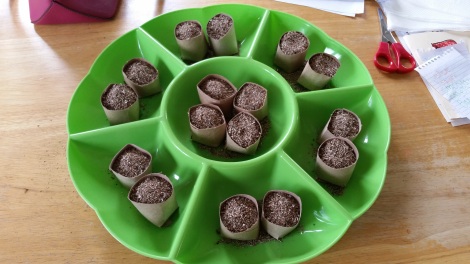 The sun just came out! Time to get moving.