On Saturday, I got to spend some time in one of my favorite places: Chestnut Hill.

As I mentioned in my last post, I had been wanting to visit Chestnut Hill’s farmers’ market. The nice weather we had yesterday had everyone in the mood to jump in the car and go someplace, so I talked them into Chestnut Hill.

We drove through Center City, along the Schuykill Expressway, and all along super winding Lincoln Drive. We were hungry so we headed directly to the market, now known as the Market at the Fareway.

“This was a good idea, Mommy,” they were telling me shortly thereafter.

I need the Market at the Fareway in my real life. I’m going to be scouting real estate looking for a spot to make this happen here in Collingwood. I want to spend every Saturday chilling outside by a hip waterfall and fire pit, meeting up with friends: 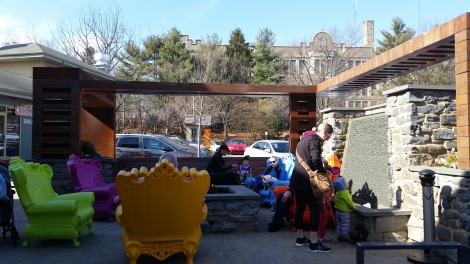 And then make my way inside to a miniature version of Reading Terminal Market, where one can get coffee, bakery treats, brick oven pizza, Korean food, Middle Eastern food, and more, plus pick up meats, eggs, milk and produce. 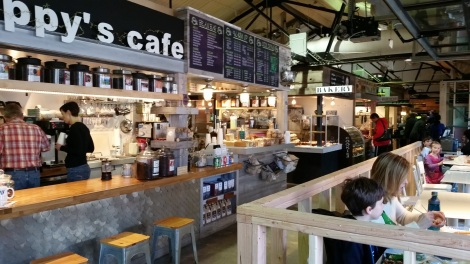 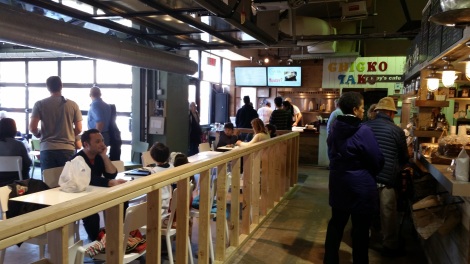 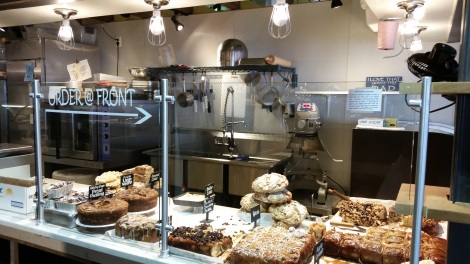 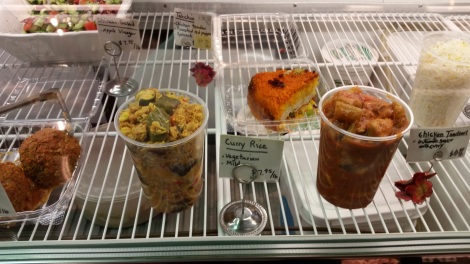 I wanted to eat more or less everything, but limited myself to Korean pork tacos from Chicko Tako: 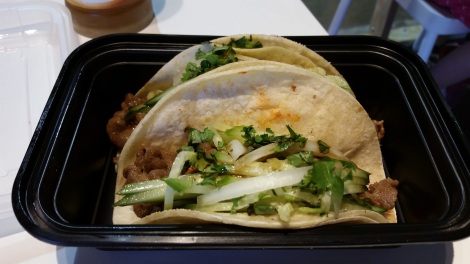 I also bought some organic eggs from free-range chickens from Neidermyer’s Poultry. I would have bought chicken but I had failed to bring a cooler or ice and I wasn’t sure how long it would be til we were home.

Neidermyer’s had lots of stuff including milk (possibly raw, I didn’t really look), rabbit, and duckling. 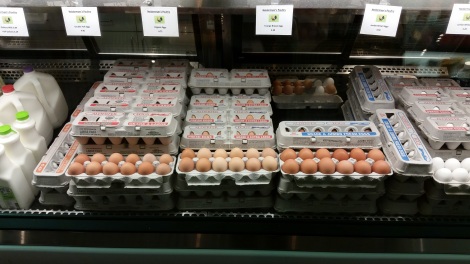 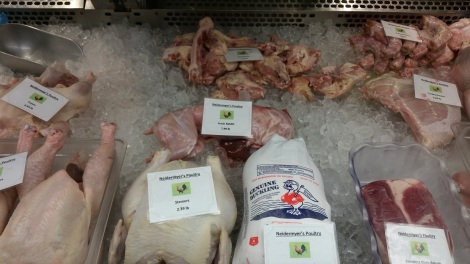 The kids and the hubs loved the Trenton Napoli pizza from Chestnut Hill Brewing Co. 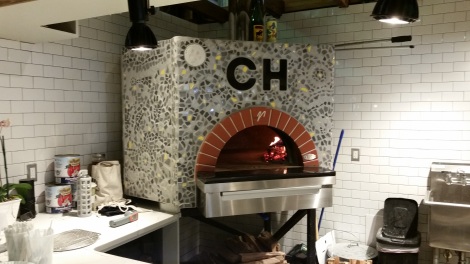 I also bought apples, potatoes, watermelon cubes, and limes from Yu’s Produce. Seemed like just regular produce — wondering if there is more local produce in the spring/summer. 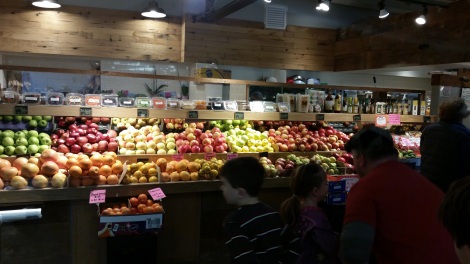 After we finished eating and looking around and making the acquaintance of all the dogs outside, we headed across the street to the playground at the elementary school, John S. Jenks School. Now look, I love my town and I get that a Jersey small town is not Philadelphia, and that Chestnut Hill is not exactly Philadelphia, for that matter. But OMG this playground! We need a playground like this! The pictures don’t do it justice. There was a whole separate “tot lot,” including a multilevel sandbox structure, before you even got to the main part, which is what I took pictures of.

My kids could have stayed there for hours. Plenty of other kids there for them to play with as well. While they played, I wandered around taking more pictures. 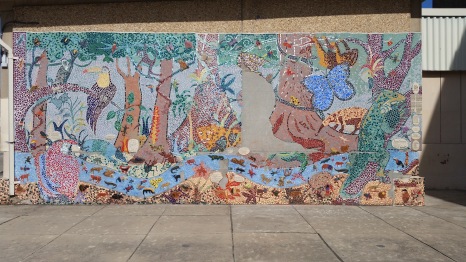 Quite a large school. Rated a “3” by Great Schools, in case you were wondering 🙂

At that point I would have liked to have done some hiking at Forbidden Drive or just driven around looking at houses (like this one or this one or this one), but hubs announced he needed to get home to handle something work-related, so home we went.

What a great time! Now I’m excited for summer and real exploring.

Yesterday (Sunday), I wanted to do road trip part deux and go to Ocean City, but we just never got going and it didn’t happen. All to the good though, as we had a nice day at home and didn’t spend money or use gas. The kids played outside most of the day. I had a yard full of boys playing football/jumping on the trampoline, and Gemma went across the street to play with her two little friends there. In the morning, the kids went through the playroom and set aside toys to sell — including, Sebastian says, all his Legos. We shall see. The driving force behind this sell-off is their desire for us to finally put up a new back fence and get a dog. I was impressed. Also their conversation during this time as to pricing of their toys was, well, priceless.

Last week was meh for cooking. Last Sunday we had a mix of fast food and convenience foods from Acme; Monday was leftovers and and Ellio’s pizza; Tuesday was baked parmesan chicken plus corn and mac n cheese.

Wednesday, I cooked the four Beef Wellington entrees I’ve had since Christmas. I have a Williams Sonoma credit card and had accumulated WS points on it. I used them to get this food, which would have cost around $100, for free (shipping as well). Unfortunately, no one else really liked them (my husband hates mushrooms), so yours truly ate them the rest of the week.

Thursday: grilled cheese and apples slices (I had a meeting); Friday: chicken nuggets and mac n cheese. One day — Thursday? — I made pumpkin bread with some frozen Halloween pumpkin. This past Saturday was tacos, and yesterday we had hot roast beef sandwiches and potato salad. Sebastian continues to reveal his carnivore side, happily eating the roast beef; the others insisted on just cheese sandwiches.

I shopped last Monday at Wegmans. It’s getting to be that difficult time of year for produce where nothing is really in season and nothing is left from the fall. I was not too inspired by what they had. Ended up buying some broccoli that wasn’t marked as to origin (but on sale) as well as the usual apples and bananas. I had tried to go to Springdale Farms a few days before just to get those jarred peaches they have, but they are closed for the season.

Luckily spring is coming and it’s almost time to start seeds! I spent some time Wednesday finishing up my garden plan. I should call it my long-term garden plan, because there is no way all those beds are going to be dug this year. But it gives me something to shoot for. I also went through all the seeds I have and determined that I don’t really need to buy any — maybe one or two things. I’ve spent some time during these nice-weather days pulling all the dead tomato plants and cleaning up the yard. The garlic shoots are still alive and even the strawberry plants seem to be doing OK (some parts have died, but much is still alive).

Other notes aside from food: I got through Valentine’s Day spending zero money. We had enough cards in our stash for all 3 kids (it helps that they all have small class sizes this year). Those valentines I believe originally came from my mom and mother in law. No treats with them, which I feel kind of bad about, but on the other hand I don’t remember getting so much candy with mine when I was little. “That’s the way it was, and we liked it!” My husband and I didn’t do anything. I’m postponing all celebrating until my birthday. My faithful reader A.A. posted on FB that in her family they have a journal that they write notes in to each other on holidays (rather than exchange cards). I love this idea and would like to start doing it!

This past week I sold three toddler shirts and jeans for $8 and a pair of women’s pants for $5. Acting on a tip from the Nonconsumer Advocate, I picked up some off-brand OxyClean powder at Dollar Tree. OxyClean is essential for brightening up and stain removal for these old kids’ clothes, but the brand name stuff is so expensive!

OK, time to get moving on this day. After two days of la la land, it’s back to reality today even though it’s a holiday.