This week is odd. The boys are at a camp at their school from 8 to 3 Monday, Tuesday and Wednesday. So we get up early, I make lunches, etc. But since the camp isn’t for incoming kindergarteners, Gemma and I get to go do whatever. So Tuesday, we were at the pool, but eventually had to leave to go pick them up. One foot in school, one in the pool.

Still thinking about what a nice vacation we had last week. Sometimes it takes me a while to start to really chill out on vacation, but this time, I woke up Monday morning feeling blank, in the best sense of the word, and stayed that way all week. I could hardly remember anything that was going on at home prior to leaving. I didn’t read or write much or daydream about future plans. Just beach, fun stuff, watching all the hurricane shows on the Weather Channel. We have greatly missed the Weather Channel since they left Verizon.

We were trying to not spend too much money on this trip; I’d say we did pretty well, not great. We skipped the water park. We did eat in a lot and ate a lot of leftovers. For the first time ever, I totally nailed the grocery shopping. We wasted hardly any food, and I brought about one bag of groceries home. Convenience foods were definitely on the menu, but I also made pork chops and rice one night, and Friday night, I made shrimp scampi with linguine.

Garlicky goodness. Eating it on the deck with some Landsharks, watching the Friday night crowd roll up to the boardwalk… perfect.

Saturday, the kids and I ventured out to the Wildwood farmer’s market. It was not huge, but serviceable, with at least three farm tents and lots of crafts and homemade foods. I bought some homemade biscotti from a lady named Dolly, and she talked a little bit about how Wildwood used to be. “This was like Fifth Avenue, all the shops,” she said, gesturing back at Pacific Avenue.

I can imagine. That downtown stretch of Pacific has so many storefronts – if they all were open for business it would be quite a scene. Wildwood has definitely captured my imagination these past few years. I’ve always been intrigued by the juxtaposition of beach and urban, a city-by-the-sea. When I was young I went to Wildwood exactly once, with my grandmother, to stay for a night at my uncle’s new wife’s mother’s house. I’m sure we went to the beach, but all I really remember is the night: sitting with my grandmother, my aunt’s mother and other old ladies in lawn chairs on the sidewalk, talking, til what seemed like midnight, hearing occasional bursts of music when the door opened at the Red Garter nightclub. (It must have been North Wildwood, because that was on Spruce Ave, according to Google.) I was sooo intrigued by the Red Garter. I think I thought there were French can-can girls dancing inside or something. The Red Garter? Ooh la la! (I was five.)

Anyway, that was all I knew of Wildwood until I had kids, aside from a few fuzzy nights in North Wildwood for Irish Weekend. Now I’m having fun exploring it, when we go. Here’s a good site that illustrates what Dolly was saying about Pacific Ave.

So I’d like to see Wildwood continue to make a comeback, and ventures such as farmer’s markets are always good in my book, so I made sure to buy some corn and green beans even though I knew we wouldn’t eat them til we got home. Why they have the market on Saturday, I don’t know. It’s turnover day. Wouldn’t they get more people during the week?

Funny story, at the market we ran into some peeps from home, so in a way it was just like being at home and going to the Saturday market.

One last note for the Shore: I resisted buying stuff so many times. A few times, I saw artwork that was cute and would look good in my house, and I was thisclose to buying it. But I made myself leave, telling myself if I really wanted it, I could go back. And of course I didn’t. It was just that urge to buy. It wasn’t even really what I wanted. I did get some nice useful gifts for others, though. Soap, clothing and food.

So I’m back home, back with my tomatoes, which just keep on coming in. My parents took some while I was gone. I blanched and froze more basil yesterday. The cukes and beans are kaput. The arugula self-seeded and came back, although it doesn’t look exactly the same. The broccoli keeps hanging on, not flowering. One lonely pumpkin continues to grow. 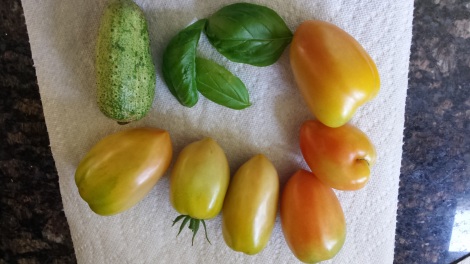 And, I picked some peppers!

The week before the Shore, I made more tomato sauce and did some other stuff. I took this picture because I couldn’t believe I had all four burners going at once:

That’s mushrooms sauteeing to eat with leftover chicken piccata, the tomato sauce, tomato gravy (using part canned tomatoes and part fresh, plus my own onion), and peaches being blanched.

This week, I’ve made a fun little pasta salad with Caesar dressing, bacon left over from the Shore, and rotisserie chicken. Tonight was shrimp stir-fry with carrots from the garden, canned mushrooms and frozen broccoli from the farmers’ market. No eating out except for one fast food lunch.

Tomorrow, one last beach day before the hurricane comes up the coast and washes out Labor Day Weekend.