Saturday: I am worn out from today’s farm market shift, but I had to write just to say that I brought home organic corn and we had it for dinner, and it was SO GOOD. Potentially the best I’ve ever had. I have been thinking of buying a share in the farm myself, and I think the corn seals the deal. I also would like my kids to be able to come and pick the blueberries and other things. Maybe not tomorrow though, when the heat index will be 105 degrees. I’ll be bringing approximately 18 gallons of water to drink. (Tomorrow will be my 2nd shift manning the pick-your-own blueberries field. Last week was hot but not too bad.) 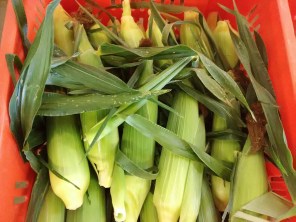 I think I’m starting to become a believer in the medicinal power of herbs. When we have cilantro at the farm stand, the scent fills the refrigerated truck it arrives in, and I love to breathe it in. Today, I was cleaning up and found two sprigs of rosemary on the floor that someone must have dropped. I brought them home and have been sniffing them… I swear it makes me feel calmer. (I also used to have a rosemary-scented “calming spray” I got from some hotel that I really liked, now that I think about it.)

Since I’ll be working Saturdays and Sundays at least as long as blueberries last, we have to have our fun during the week. This week, Aidan went to the pool with his buddies twice, and me and all the kids went two days (some overlap there, but you get the idea, don’t make me draw a Venn diagram). One of those days was an informal birthday party for one of Gemma’s classmates, so that was nice. One day, we went to meet a dog for potential adoption, which resulted in us going back the next night and adopting… two cats. A bonded pair of brothers. Basically, when my kids saw the whole room full of cats it was all over. So Penn and Teller have joined the family. They were extremely shy at first, but we had a breakthrough the second night, facilitated by special treats. With Penn, anyway. Teller is going to be tougher. (We have failed to come up with replacement names.)

Sunday: Hot hot day at the blueberry field. Shout-out to my parents for taking the kids to the pool while I was gone and for having us over for dinner too when I got home. 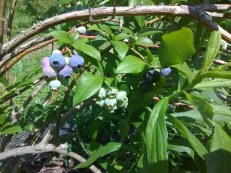 Not too much else has been going on. I made another batch of parmigiano peppercorn ranch dressing and ate a lot of salad last week. I also made ranch potato salad (I was the only one who would eat it). With working 9 to 1 on the weekdays, I have to plan ahead a little. I can’t make gravy in the morning, for example. So I make it in the afternoon and we eat it the next day. We went to Friendly’s to celebrate Aidan’s 5th grade graduation and have been ordering pizza once a week generally but mostly we’ve been eating in.

The other night, I planted my basil and parsley plants near the tomatoes, but the parsley plant died (it wasn’t looking good before the transfer). Too bad, as I was using that to make that dressing. The bean plants are doing well and baby beans are visible. There are about 15 plants.

We are avidly watching The Staircase on Netflix; I’m reading The Ocean at the End of the Lane by Neil Gaiman and downloaded a sample of Squeezed (about how it sucks to be middle class, basically). And I’ve been reading a bunch of stuff online about urban farming, and today I read this pretty fascinating article about Google building a “smart” neighborhood. I also read Hunger by Roxane Gay and The Last Black Unicorn by Tiffany Haddish recently… rather at opposite ends of the emotional spectrum. (All books read on Overdrive.)

This week: pool, playdates, 4th of July, must get an oil change. Some other random errands to do. Still loose ends to tie up from the school year. I’m very much looking forward to sleeping in on the 4th, because I won’t get to do that again for a while.

We are a one-vehicle family at the moment, and probably will be for some time. It was not exactly by choice, but I have to say that right now, it works OK. It is not that much of an inconvenience. I find myself just staying home more rather than walking or biking more — but mainly because it’s so hot now. It’d be nice if we could continue to make it work for a while. I just paid off my minivan, like last week, and it feels great to have no car payment. It helps to have parents close by and a helpful “village.” 🙂