My kitchen was a-bubblin’ and a-brewin’ yesterday.

In one pot I had a batch of baby clothes, soaking in dollar store Oxy Clean and hot hot water. A potent brew indeed. This was after they sat all night with a poultice of Dawn, baking soda and hydrogen peroxide on their stains (many thanks again to Katy Wolk-Stanley at the Nonconsumer Advocate for this method). I should mention that you must dissolve the OxyClean fully in the hot water. I ruined a few onesies with bleach spots a while back, in my haste to get a batch going.

One of my restored-to-new-life baby clothes lots sold on Saturday, through Facebook, for $20. I’d been asking more but the buyer pled financial difficulties and I certainly understand those. Plus, a bird in the hand… (is worth two in the bush. Does anyone say that anymore?)

In another corner of the kitchen, the Crock-Pot stewed with apples, breaking down into applesauce. A mix of Granny Smith, Yellow Delicious and Gala, plus some water, lemon juice and salt. No sugar needed and I steered clear of spices, afraid they would turn the kids off. This was my second batch. I made some Monday, but when I went to blend some of the chunks out, I overdid it and ended up with what looked like Gerber baby applesauce. Too creamy. When this second batch was done, I just put it in the fridge, chunks and all. I’ll assess it today. The flavor of the first batch wasn’t great, either. Hopefully this second batch will at least be good for baking. I’ll have to keep tinkering. Sebastian and Gemma like applesauce. It is pretty much the only fruit Sebastian will accept in his lunch. I’d rather make it myself than shell out for Mott’s.

Last but not least, the oven held a tray of cubed sweet potatoes, coated in olive oil, honey and cinnamon, caramelizing away. This was my last sweet potato from a bunch I bought back in… September? Pretty amazing that it kept so well, in a kitchen drawer. We had them at dinner (only I ate them). SO GOOD.

Oh and prior to the sweet potatoes, I blanched and froze broccoli. Not as great a smell to have in the kitchen, but having frozen broccoli in the fridge on hand for dinners is very necessary. I include this picture to show that I haven’t bought paper towels in maybe 2 months now? Rags work well for virtually everything. This is an old cloth diaper that I bought but never used as a diaper. It’s nice and absorbent. (Confession: I have some napkins I can use if absolutely necessary, like for making bacon.) For storing the broccoli, I have plenty of plastic freezer bags that are on their second or third use. I haven’t bought those new in a while either.

My soundtrack for all these endeavors was A Deeper Understanding by The War on Drugs. Need music if I’m going to peel all those apples.

Overall I’m feeling a little more inspired in the kitchen, probably simply because it’s spring. The other night I tried out a recipe from Andie Mitchell’s website (the food blogger whose memoir I just read). It was her Blackened Chicken with Light Buttermilk Ranch Dressing. Hubs and I enjoyed it quite a bit, although hubs used bottled French dressing and a truckload of croutons on his, so… For me, the best part was learning how to blacken chicken. Can’t say I’ve ever done that before. Good to have lots of chicken prepping methods under my belt. 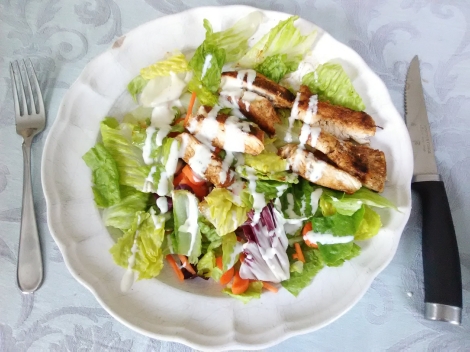 I also went to Mom’s Organic Market for the first time recently. How had I not been there yet? It is right across the street from Whole Foods, but the vibe is so different. Less crowded, more basic, fewer distractions. Less evil. I went a little nuts and bought mushrooms, aged cheddar, mushroom ravioli, a new brand of chicken nuggets, lots of fruit, and more… all organic. Tonight I’m having the mushroom ravioli in a brown butter and sage sauce (yes I bought fresh organic sage).

Took this picture to remind myself for next time. I need to buy some spices.

Something else I’m attributing to spring fever is the resurgence in sales of my items. Sold a whole bunch of stuff recently, in addition to the clothes lot mentioned above:

Hubs has also sold a bunch of his stuff from the garage. I went through the garage as well and gave away a bunch of stuff on Facebook. I also found some things to list, like life jackets that we barely used that the kids have outgrown. It’s never-ending. I could spend two full weeks listing stuff. Now, Easter is this weekend so that will put a damper on my eBay listings for sure and sales in general. Stupid holidays…

Ahh the warmth of spring, the relief from winter. The windows have been open the past two days. The heater is silent. The kids and a slew of their friends played outside yesterday. I’ve decided to at least plant some arugula, I can’t resist. The raw dirt of the beds, finally free of snow, beckon me. Spring makes me want to forget everything I ever said about moving…