So I finished my first crochet project. It is neither truly done, nor perfect — I need to buy a yarn needle to weave in the ends and attach the pom pom — but certainly wearable and keeps the old giant noggin warm. I would have been done faster if I hadn’t allowed my yarn to get into a terrible tangle of knots. I spent most of the NFC championship game trying to untangle it. Sebastian and Gemma were pretty impressed. They want me to make stuff for them now.

I bought some more yarn yesterday and am thinking of trying socks next (it’s a lighter weight yarn).

Here’s Anna wearing some of my practice stitches.

Today I spent some time attempting to get formula stains out of baby clothes, using Katy Wolk-Stanley’s recipe from The Nonconsumer Advocate (baking soda, blue Dawn, hydrogen peroxide, followed by soaking in OxyClean (dollar store knock off)). I think it is working. Most of the stains are coming out, and what’s left probably will after another round. I wish I had paid more attention to stain removal when my kids were little.  I threw a lot of clothes away. 😦

I’ve listed and sold some more items (toddler shoes, Easter dress, my clothes), and I’m up to about $70 for the month. Would have been $100 but someone just reneged on a $30 eBay sale. Very annoying because now it will be tied up with eBay for a while before I can relist it.

I cleaned out my closet two Sundays ago, which led to piles of clothes to donate, sell, and remove stains from. 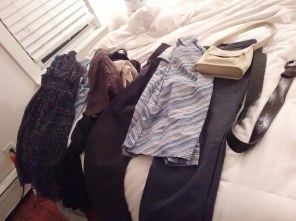 Also took a stab at my husband’s clothes; he has plenty he should get rid of. But most of them will have to wait for his OK.

I took some clothes that were not salvageable to H&M at the mall — they take any clothes for recycling and will give you a 15% off coupon (I didn’t want to wait in line for that so just dumped the clothes and left). This is a great way to keep stuff out of landfills! I wonder if any other clothes retailer does this.

It felt really good to pare the closet down. Since my realization that we should sell the house, I keep thinking about what it would actually be like to move and how much stuff I don’t want to bring with us. So whenever I get a minute, I’m purging. I did my night table drawer the other day, which seemed to hold way more than one drawer could possibly physically hold (mostly old documents). I did the playroom a few weeks ago and threw out a ton of stuff (and boxed up a lot too). That felt amazing and it still looks good.

Tonight I’m making shepherd’s pie since I have quality ground beef from Whole Foods and a bunch of potatoes that need to be used up. Last night we had frozen pizza before heading to Skate Night (a school event).

Oh hey, now it’s after dinner. The pie turned out great and hubs and I wolfed it down but the kids wouldn’t eat it. I GIVE UP. For eff’s sake, I didn’t even put any veggies in it besides onions and I minced them to like a 0.0000001 inch. They like beef, they like mashed potatoes…

Wednesday, I made gravy, using up the last of my frozen tomato sauce. I still have a lot of frozen basil, some garlic, and I think one onion left, from the garden. The gravy was one of my best tasting. I think the fresh basil (it’s frozen, but as opposed to dried) makes a difference. To me, anyway. I also made Smitten Kitchen chocolate chip cookies. They were picture perfect and tasted great but got hard so fast! I need a hack for that. I heard putting a piece of bread in the cookie jar helps.

So: Purging. Cooking. Listing and selling. And job applications. That’s my life in a nutshell right now. I came to a local coffee shop today to work on this post and just get out of the house. A welcome change of scene.

I’m reading American Gods by Neil Gaiman on Overdrive. Really enjoying it. It’s a little more free-wheeling than anything I’ve read lately. I’ve never read any N.G. before although I always knew of him. Before that, I read Salvage the Bones which was good although intense (dogfighting, Hurricane Katrina, poverty).

Last weekend was a good one. I finally shook my cold, more or less. Got to go out with some friends on Saturday night, then went to a political thing on Sunday with another friend. The weather was mild and the kids and I were outside a lot on Saturday — they played and I cleaned up. Gemma and I took a walk. Friday night we celebrated my mom’s birthday with a family dinner. This weekend is also supposed to be mild. Maybe I’ll find something else to purge — or maybe I‘ll paint…