Recently I took part in the “black and white photo challenge” on Facebook. It was fun and reminded me of when I was around 19 and mildly obsessed with taking B&W photos for a while (with my 110 camera or whatever the heck I had). Later in college, I took a photography class. That was fun, but again I was somewhat limited by my camera, which was borrowed and kind of crappy. Still, I made some interesting prints. I used to have those photographs in a box somewhere; possibly they might still be in the attic.

What stands out the most to me now is how in college, I had to fight through my shyness/anxiety to go out in public and wander around with a camera, all the while expecting someone to come up to me and say, “HEY! You can’t do that here!” I remember being in Manayunk, taking someone’s picture through a cafe window and slinking away, waiting for someone to come out, grab my camera and break it. (Possible exaggeration but you get my point.) Nowadays, I give less of a shit every year and stick my camera wherever I want, and if anyone were to ask (no one does), I’d say haughtily, It’s for my blog.

So enjoy some outtakes from my week of black and white photos: 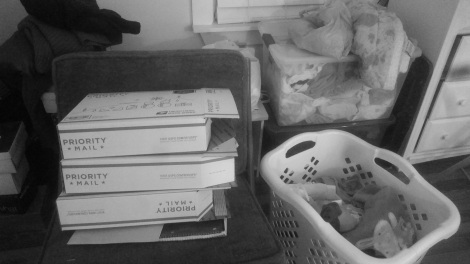 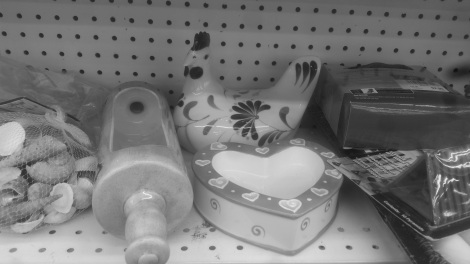 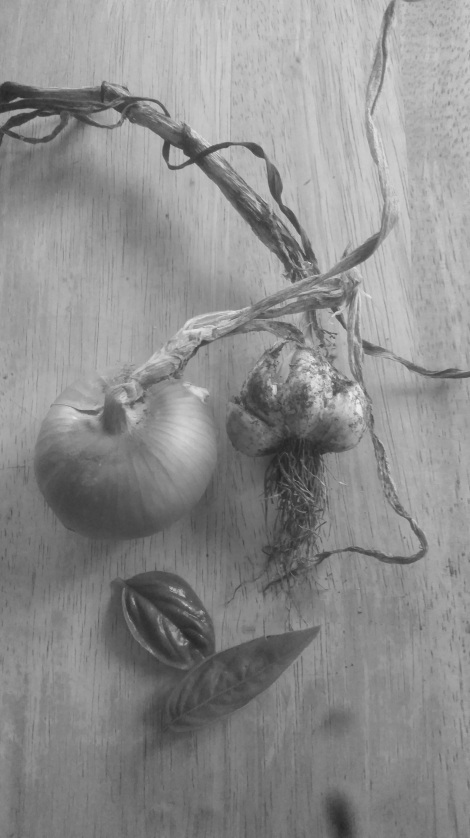 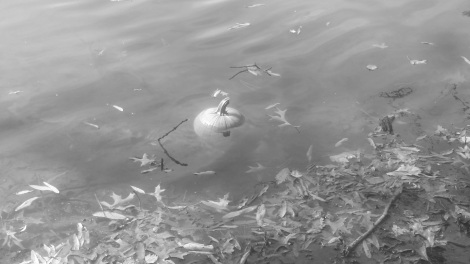 That last one is carrot leaves.

Meals have included spaghetti, with gravy made using my homemade frozen sauce for about one-third of it; hot turkey sandwiches with mashed potatoes; French toast. Have been eating things like frozen pizza and fish sticks on nights when we would normally order in.  One day I drove by Boston Market and was inspired to recreate their “Chicken Carver” sandwich. After a trip to the supermarket, I was able to put rotisserie chicken on a wheat roll with some Dijon mustard and mayo mixed together, plus extra sharp cheddar. Yum!! In other sandwich news, I realized I had quite of bit of arugula still going strong out back, so Saturday’s lunch was turkey on wheat with mayo and arugula (thereby using up turkey leftover from hot turkey night).

This morning I had the last of the pumpkin/yellow squash/chocolate chip muffins I made a while back, with my coffee. Man that was taking one for the team, eating them all up. The taste is good but the texture is so gluey as to be chokeable. I would have gotten kicked off Holiday Baking Championship for sure. But they satisfied my sweet tooth at least.

Yesterday I had a large farmers’ market haul for the first time in a while:

Prior to the market, Gemma and Sebastian had their final soccer games of the season. Aidan continues his season through November. With Daylight Savings Time ending last night, I’d say we are now in Serious Fall.

Last Tuesday was Halloween. Our costumes were delightfully frugal. Gemma wore a dress-up dress that Santa brought her, that is flexible enough to be queen, pirate queen, witch, whatever, and I think she was all of them at some point. Sebastian, after weeks of dress rehearsal, ended up as a sort of zombie — he wore the skeleton costume we’ve had forever underneath old clothes that I let him shred, and we painted his face sort of half zombie/half killer clown. Aidan was a character from a video game and was able to pull everything together from around the house. He even had a quiver borrowed from a friend and arrows that I made Halloween morning, but due to blah blah blah logistics he didn’t actually end up carrying them.

After making Aidan’s arrows, I was sitting around wanting to get in on the Halloween fun. I looked through my clothes and had this brainstorm (we had green makeup left over from another year): 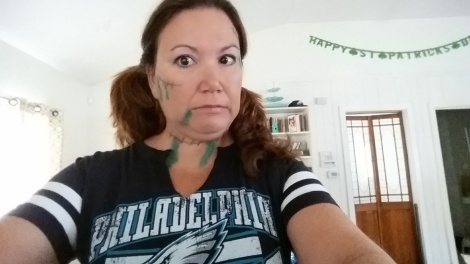 I bleed green, GET IT? (not many people did).

So all I spent on Halloween was $9 for candy plus a small makeup set (forget the cost, not much) at Target. High five.

I didn’t do any painting this week, but my wonderful husband did fix the stuff in the dining room that I needed him to fix, so this week I can finish the walls for sure!

Overall, a pretty frugal two weeks or so, except of course for a $540 vet bill for a sick cat, but what can you do… Hoping to keep it going this week. I have been keeping a list, as a draft post here, of what I spend each day and what I make for dinner. Seems to help hold me accountable. I did buy a new Thermos for Aidan, in order to broaden his lunch choices. I also got 4 new glasses at Goodwill, for $3 I think. We’re always breaking glasses and losing spoons. With soccer practice mostly over, I should have more time to cook. I’d like to make a bunch of stuff this week, from breakfast items to snacks. Need to organize the stuff that’s for sale and move some of it back out to the garage. Most importantly, need to reclaim the dining room. Yesterday, I took down our numerous Halloween decorations, so at least that’s done. I also want to make sure I get some walking in; I did so this past week and I can feel the difference. Where’s my morning walk buddies at??