Apparently I wrote a post with this title in 2015. Well, excess stuff has built back up again and it’s time to sell sell sell. Painting has been put on hold for a second while I try to get some cash in so I can buy more paint.

So far I have been able to sell: 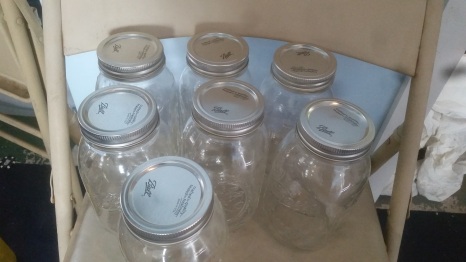 And I have a lot more listed, on Facebook, eBay and craigslist.

Most excitingly, perhaps, I realized that this end table and chair that I’ve had forever are totally midcentury modern and could probably be easily sold (if I can refinish the top of the table). They were given to me for free (I think) by a co-worker’s uncle back around 2002. Aaand in the drawer of the table were two full packages of printer paper and some other office/school supplies! 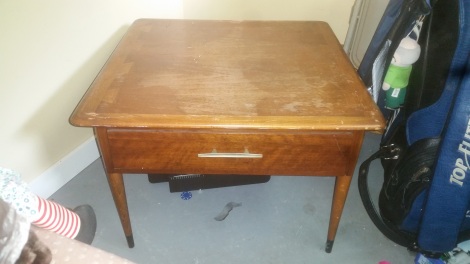 My husband also has some Fenton glass pieces, which apparently are collectible, and I might be able to sell them for something significant, but I need to get a guidebook.

So that’s been fun, and I’m seriously reclaiming some space in the garage, kitchen, etc.

I do believe I ought to get a medal for my level of thriftiness lately. Oh the pennies are so unhappy, I am pinching them so tight. I haven’t had a fast food or Wawa lunch in forever. We have had most of our dinners at home plus a small bit of fast food/Wawa. No restaurants. I’ve been food shopping with the calculator open on my phone, to ensure I don’t go over a certain amount. This is what has to be done right now. The upside is that everyone appreciates food more when there is less of it in the house. We’ve been creative with what we have, instead of running out for quick fixes. To the point that one night, I ended up making an omelet for Aidan, when he was hungry after soccer practice. Not something I usually find myself doing at 7 pm. 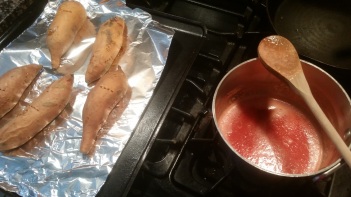 I harvested some sunflower seeds, but haven’t done anything with them yet. I think they’re probably too small to snack on… 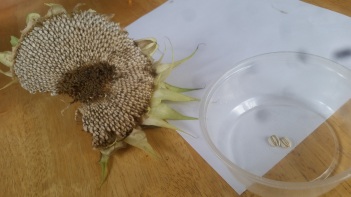 I’ve been reading Truly Madly Guilty by Liane Moriarty for free on Overdrive and enjoying it immensely. I just heard that another of her books is being turned into a TV series, but can’t recall the name.

This week went by fast. I was thinking how grateful I am for school and the routine of it. Those wide open summer days were fun but also terrifying, for me. Now everything revolves around school; either we are at school, or preparing for it (food, clothes, homework); or it’s the weekend and we are actively, briefly savoring the absence of it. But it’s always there. Once in a while the kids ask if I can home school them. Of course there’s a part of me that’s drawn to it, the bossy part that wants to be in charge of everything. But the rational part of me laughs gently and says, Maybe someday, darling, if you are bedridden with a long illness and I have no choice.

This weekend: two birthday parties, three soccer games, and the finalization of Halloween costumes. Apple picking would be nice. And two more sales scheduled to be picked up from my porch on Sunday. As Katy over at the Nonconsumer Advocate always says, “Crap out, money in!”