I started broccoli seeds for a fall planting two days ago, and the seeds sprouted today. This part of gardening is like when you pee on the stick and it turns positive. Pure excitement and gauzy hope and joy of creation.

At the other end of the spectrum, trying to protect maturing watermelons from a marauding groundhog is like sitting up at midnight waiting for your teenager to get home safe from a party. The sense that no matter what you do, the outside world and all its bad elements can’t always be avoided.

Today is day 86 of the watermelons’ life, and technically they should be ready. A few days ago, lacking all self-control, I picked the one watermelon that was giant and stood a chance of being ready. I told myself that these watermelons were all just an experiment anyway, and in the spirit of science I should see if my intuition that it was ripe was correct.

But, t’was not ripe:

Too bad, but now I know, and I still have four other ones out there. (Online, I found tips on deciding when to pick them, and I did kind of know that this one wouldn’t be ripe, but I just couldn’t help myself. I also, illogically, felt it would be better for me to pick it, even if unripe, rather than risk the groundhog or something else ruining it.)

Elsewhere in the garden, I have a new round of carrots and lettuce planted. Yellow squash and pumpkin babies are finally forming, but alas, powdery mildew has attacked, despite my milk solution treatments, so I doubt they will make it. Zinnias are blooming out front. Lots of green tomatoes but zero reddening. Onions have flopped over and will be dug out soon. All the garlic bulbs, about 16 of them, are hanging in the garage. I think I have a few baby peppers too.

The weather has been great this week, and I’ve spent a lot of nice evenings out there, mostly problem-solving. I tried to rework the watermelon protection, in a spirit of live-and-let-live with the groundhog. I have a trap now but… I don’t know. Trapping him is a whole thing, requiring camoflaging the trap, baiting it without setting it for a few days, etc. Maybe in the fall. Other plots needed beefed-up protection from the squirrels and birds. I enjoy seeing what I can come up with, with just the sticks, bricks, old logs and bird netting I have on hand. I also had an issue where my carrot seeds got washed away in a thunderstorm, so I’m experimenting with protecting them with cardboard. Planting in summer is not the same as planting in spring!

By the way, the other night, the kids ate some of my garden broccoli that I had frozen and declared it their favorite broccoli ever and said I should always make that broccoli. That, in a nutshell, is all I have ever wanted out of gardening!

Gardening is but one active sphere right now. I’ve got a lot going on in every sphere and they are all jostling for supremacy. There’s also food preservation; getting ready for our vacation; getting ready for back-to-school; getting the house ready for refinancing; selling clothes on eBay; general BS like having my car inspected; and the newest, Gemma’s imminent birthday party, being held here.

I met with a realtor recently, and she really helped me get on track regarding this house. I was saying in an earlier post that I felt at sea, not sure what I should be focusing on. Well, now I have a focus: to do all the updating and repairs that this house needs so that we can (most likely) successfully refinance or (less likely) sell it and move. To that end, I started taking the wallpaper down in the dining room, which is a mammoth task. When that’s all down, I’ll paint it and update the chandelier and sconces. Then onto other rooms. Since I spent four hours at the pool yesterday, it behooves me to get out my scraper and spend a couple hours in the dining room today.

In the food preservation sphere, I’ve been having fun with nectarines from the farmers’ market. Rather than straight up preserve them, I made some desserts and will freeze whatever we can’t eat.

Super good, especially with some whipped cream. The corn came in the form of cornmeal.

I used the ready-made pie crust I had leftover from the last pie, and used a round Tupperware container to cut the circles. So cute, the kids were enticed to try them, but they ended up abandoning them in favor of cherry water ice (we were at the pool).

Full disclosure, I forgot to include the sugar, so ended up prying them open right before they went in the oven and dumping some sugar in each one. Otherwise they would have had nice pretty fork marks. That’s what I get for rushing.

Dinners have been less than stellar but this picture reminded me that I did make gravy and meatballs, with farmers’ market parsley, onion, and ground beef, and garden garlic and basil.

Two Saturdays ago, I skipped the farmers’ market in favor of stripping the wallpaper. Last Saturday, I got a big haul:

By now, we’ve eaten the corn and preserved the nectarines and broccoli. I’ve been using the arugula on turkey sandwiches, but most of it will end up in the compost. I should have split it at the beginning and given half away. The baked goods are gone or frozen. We ate some of the potatoes and the rest will go in the potato salad.

I’m enjoying August so far; the weather has mostly been nice, with cool nights. Just the teensiest hint of fall observed in the air as Gemma and I walked around the other night delivering party invitations. Feeling good that our vacation is now almost here. I feel kind of whatever at this point; whatever we do or don’t do this summer, it’s all good. I’ve been cracking down on screen time and feel that the kids have responded positively: playing with each other imaginatively, even doing a massive cleanup of their rooms, unasked (although then they tried to get me to pay them for it). I tried Gemma’s cleats on her and she instantly got excited and wanted to go right outside and practice soccer (which we did, in the rain). We stopped spur of the moment at a park the other day during errands and they had fun playing with other kids and investigating these giant blobs in the lake: 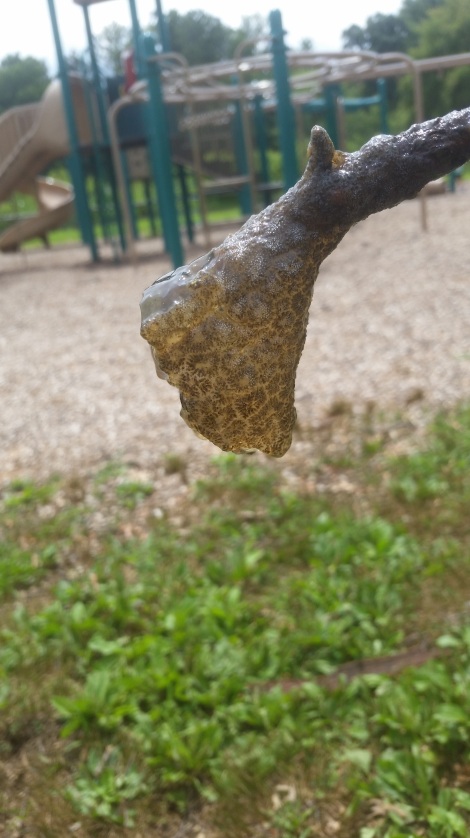 Thought maybe they were eggs of some kind but they turned out to be Bryozoa.

I’ve been reading free samples of books on my Kindle and then trying to find said books on Overdrive, to no avail. Looks like it might be worth it to fork over $85 to join the country library system to have access to more free e-books. I’d like to read:

Real Food, Fake Food (like when your Parmesan cheese is actually wood pulp or whatever)

How to Cook A Moose

I did end up getting a lot of wallpaper work done today. Maybe I’ll pick paint colors this weekend?

One response to “If You Gotta Problem”