I’m ready for ya. I’m coming at ya. Wheels are spinning and smoke is coming out of my ears.

I even put purple streaks in my hair. Whaa? That’s right.

I just feel like this is the year to get crazy. Maybe it’s the imminent inauguration. Maybe it’s because I’m turning 40 this year. Maybe it’s because the early hours of January 1 here were marked by not one but two fires. Yes, we set our side lawn on fire with sparklers at our New Year’s Eve party, leaving two mysterious-looking charred circles, and then around 3 am, the vacant house across the street caught on fire, cause inconclusive.

Maybe it’s the distinct possibility of Obamacare collapsing, after all the time I put into choosing our plan for this year.

In real time, nothing much radical going on (yet). Today, Saturday, it’s snowing, and the kids are playing outside now for the second time today. Later we are going to try to trek to a nearby birthday party. I would like to be baking, but I have a bit of a headache and I’m just not fully feeling it. This past week, we existed on leftovers from New Year’s Eve, pizza, dinners at my parents’ house and one real meal of pork chops and homemade rice a roni. I need to clean out the fridge and get some meal planning going for next week.

For the New Year’s Eve party that we had, my culinary contributions were spinach dip in a sourdough bread bowl (first time I ever made it, somehow), crockpot meatballs with a honey-garlic sauce, and chocolate chip cookies. Fun night 🙂 I really really really need to get the dishwasher fixed though. It is killing me on days like that and Christmas Eve where I’m trying to make a lot of stuff. And really, every day. Killing me.

Monday, the last day of break, the kids and I trekked to the outlets to find new sneakers for Aidan. We found a pair of Nikes for $25 — he went with the low-price sneaker so that I would also get him this sweatshirt he wanted. All in all, still came in under my budget for his shoes. Didn’t get anything else at the outlets, although we ate lunch at the food court there. Then it was off to the beauty supply store for the purple dye, a real spur-of-the-moment decision.

Tuesday, I felt a little sick and mostly stayed on the couch with the computer, catching up on bills and the budget and some other things. Definitely did not spend much in December besides Christmas shopping.

Wednesday, took a lovely walk and thought about some of my new ideas for 2017… I also dropped a bag of clothes off for credit at the Nesting House. And we got the trampoline set up. 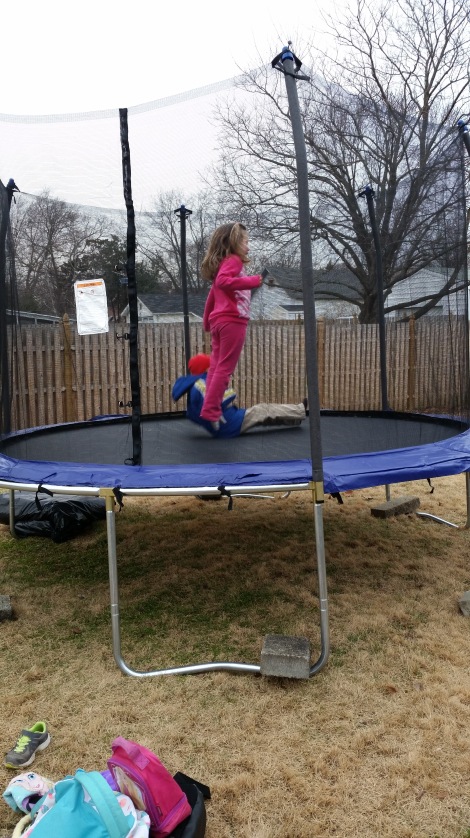 Thursday, hit Goodwill and found snow boots for Gemma, but none for Aidan. Also just had to buy this:

if not for me then for one of my cohort turning 40 this year. Alas, I dropped it and broke it after I got home. Thankfully it was only 99 cents!

I need to start shopping the thrift shops for next year’s winter coats — I did this at this time last year and found nice coats for Gemma and Aidan.

Friday morning, I spent working on a new mortgage refinance and testing out what Sleeping Giants does, before hitting Acme for some groceries.

So now it’s Tuesday. Sunday, I cooked and cleaned all day, didn’t leave the house. Got gravy started, using garden tomatoes, and ended up having that for dinner last night. Also defrosted some pureed sweet potatoes, which I need to use in muffins today. We had homemade waffles for dinner on Sunday. Yesterday (Monday), I tried to make homemade granola again, but was just a bit short of honey, so it’s not sticking together in bars like I wanted, exactly. I love the taste, though, so I will continue to tweak this. Today I have to grocery shop for perishables, mainly — I did an order on Amazon Pantry again, and that’s arriving tomorrow. As well as some other errands.

Yesterday I sold some earrings on the Facebook yard sale for $5, and last week it was a snowsuit for $10. Squirreling that away. I’m coming to realize that after our great purges of 2014, the attic, garage and basement are collecting stuff again, and I need to sell it!

Been thinking about the garden again. Spring isn’t really that far away. Realizing that a back fence is going to be important for keeping groundhogs and other animals out, so I need to set up contruction and financing of that. Also need to finish my planting plans.

Looking back on 2016: it was a fun year for me. Lots of good times with friends and family. Our family grew with the addition of my nephew, and my brother got engaged. We had our awesome Maine vacation, which I was reliving last night while watching Maine Cabin Masters on TV. My garden was bountiful. I feel like I really tried to stretch and grow as far as cooking and food knowledge, trying lots of new recipes. I had my “local food” epiphany, which was pretty radical and continues to affect how I think about food, although it has proven a hard promise to follow all the time. I think someday I will look back at 2016 and see it as the year that important groundwork was laid for the future, physically and mentally.

For 2017, hand in hand with the impulse to get wild is the sobering reality that this gal needs to start bringing in an income again. Or at least start seriously thinking about how to start earning again, and what kind of work I would want to do and what education is needed. We can’t be a one-income family in this house, not really, and I think both hubs and I are reluctant to do a dramatic downsizing, although it’s not completely off the table. Not to mention that I have to think of what my career path is going to look like later, when the kids are totally grown, etc.