The whirlwind of October continues. The end of soccer is in sight; today is Sebastian’s last practice of the season, due to Halloween and then Daylight Savings Time ending. I am ignoring the emails about winter rec sports. Our sports will be leaf raking and snow shoveling 🙂

Last week was decent for real food and cooking. I went to Wegmans on Tuesday: 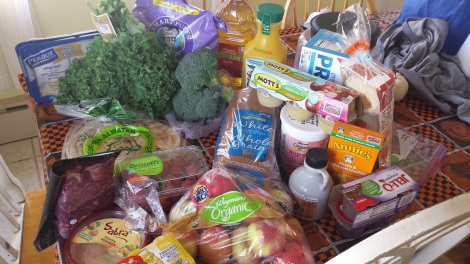 Mostly good choices. More or less. That kale is from Pennsylvania, the broccoli from California, both organic. We had some of the broccoli that night, and the rest I blanched and froze. The kale… goes to the guinea pig. We need to try it ourselves sometime. The apples are from the U.S., but I’d really like to go apple picking locally and have that be our main apple source for a while. Organic if possible. Otherwise, need to bring some crates to the farmers’ market and haul a bunch home. (Those small Honeycrisp ones I bought are really good though, and the perfect size.)

Here was our menu:

Monday: fish sticks and sweet potato fries (gotta love when the whole dinner is on a cookie sheet)

Tuesday: ribs in the slow cooker with mashed potatoes, broccoli, and canned corn

Wednesday: pizza, at a local place after 5:30 soccer practice

Thursday: Don’t remember, but this was the day the fridge was out of commission so… it was probably cereal or who knows. Not takeout.

Friday: nachos for me, mac n cheese for them, with apple slices (Hubs was out of state Wednesday through late Friday)

One McDonald’s lunch, when I was at my sister’s on Wednesday. I had a Wawa reward for a free hoagie so I got a turkey one, on Thursday.

The fridge started acting up Wednesday. The repairman came on Thursday, and $220 later, it was fixed — the door has been failing to close properly and this finally led to a freeze-up of the interior and then the fridge got warm. I had him attempt to fix the dishwasher as well, but he couldn’t. Waah! Now I have to go back to Samsung and see what’s up.

In the time that the fridge was warm, I lost some food. My own fault — I thought it was warm on Wednesday, enough so that I moved a pack of short ribs to the freezer. But I let the rest go. Then on Thursday, the guy measured the fridge at 66 degrees. Yikes! Thank God for the garage fridge. The good news is that the fridge is nice and decluttered. And the guy said the fridge could go another 10 years!

Losing that food made me determined to not lose anymore, so I made sure to preserve that broccoli. I also did a giant clean-up of the tomato plants, on Friday. Dead branches, tomatoes that fell and rotted, blossoms, fruit that’s too small to ripen before frost — got all that out of there. And picked a ton of tomatoes. I think it’s about 50/50, the ratio of usable fruit to non-usable. And that’s with me making no effort, since school started, to get rid of bugs or squirrels or anything.

In general, I’ve been really trying to look at what’s in the fridge and freeze it if I can, if we are not going to use it. And then to remember what’s in the freezer and use that.

Sunday, I made gravy with sauce and peeled tomatoes from the freezer, taking care to use the oldest ones, and one of my onions. So just the paste was canned. Imagine when all the gravy ingredients come from the garden?? Could be happening next year.

So Friday afternoon/evening, I got all ready for what was going to be a killer Saturday: 9 am soccer game, 10 am soccer game, 11 am-4 pm Fall Festival, 7 pm beef-n-beer travel soccer fundraiser. Baked and frosted cupcakes, made signs, packed up the car, washed all the soccer clothes.

By the time I collapsed into bed, I was praying that soccer would be canceled, since it was supposed to rain overnight. It was just like the night before a potential snow day. Prayers were answered the next day — and the festival got canceled (postponed) too. Went from a packed schedule to a lazy rainy day.

So I went to the farmers’ market — it’s open rain or shine. BY MYSELF. 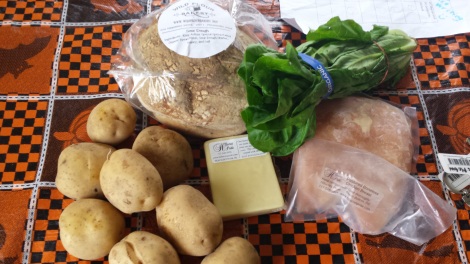 Some type of potato I never heard of, chicken breast, extra sharp cheddar, sourdough bread and romaine lettuce. I contemplated many other things, but my budget was limited. Lots of peppers of all different colors. Mushrooms. Apples. So nice to be there alone.

Went home and had a super yummy grilled cheese with my cheese and bread. Then I went around the house putting sh– away. All these random things that belonged in other places. I did ALL the dishes (well, me and hubs together). I did laundry. Preserved broccoli and tomatoes. Took a long walk with two of the kids, around the neighborhood in the wind. Folded clothes. It was a great day. Topped off with the beef-n-beer that night, and my BFF came up and went with me. Great to hang out with her!

While standing around at Aidan’s soccer game Sunday afternoon, watching Sebastian and Gemma on the playground there, I started daydreaming about chocolate cake with homemade whipped cream. Believe it or not, I’m not usually one to daydream about food. I guess that’s more for people on diets, lol. I ended up making a quick trip to Acme and later that night enjoyed homemade whipped cream on a Pepperidge Farm cake. While watching Bad Moms on TV. So bad. 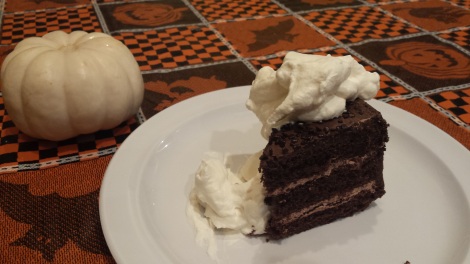 One last random thing: Today, Gemma ate my homemade granola (I had frozen it last week). Ha! I knew she really liked it. I couldn’t believe it when she turned her nose up at when I first made it. Validation is mine.

In non-food news, I’ve been trying to get back in the game of selling used clothes. I think it’s time to sell what once was sacred… Gemma’s baby clothes. Sniff. So I’ve spent some time digging around in the boxes in the basement, thinking about how to organize lots, what is not sellable, what platform to use, etc. There’s eBay, Let Go, Poshmark, the local consignment shops, Facebook yard sales. It’s overwhelming, so I’m just trying to devote a little time each day to testing the waters.