We’re in the midst of a mini fall vacation. The kids have off until Thursday. I hadn’t planned much for this break; it snuck up on me. Yesterday was taken up by food shopping, and today we went to my sister’s to help out with her new baby. Tomorrow, perhaps apple/pumpkin picking. Very sad that I don’t have my own pumpkins or cornstalks this year 😦

Last night was very chilly — windows shut, hot chocolate. I need to keep an eye on the temps. Green tomatoes will need to be picked and the strawberry plants moved to the garage before the first frost.

This weekend was rainy but enjoyable. Saturday morning, the rain held off and Gemma and Sebastian had games while Aidan had practice. Gemma had soccer photos as well, so we were at the park by 8:30. We lingered at the park after the games, playing at the playground. Back home, when the rain started, I began doing laundry and the seasonal clothes switch out and that went on for hours. I also decluttered the dining room and decorated for Halloween.

Sunday, we went to my sister’s house and watched the Eagles game there. It was an off week for Aidan’s travel soccer. Back home that night, I watched the premiere of Divorce on HBO. Pretty good, darkly funny. At the end, a monstrous spider ran across the family room rug and under the TV, a timely reminder that divorce will never be an option for me. (Actually, the way things worked out, I was the one who ultimately trapped it and threw it outside. It just took me five minutes of staring it down in a corner to get the nerve to throw the plastic container on top of it.)

Friday, the weather was great and I got some work done on the new garden beds. I have a new and improved, lazier plan. I’ve marked off the new beds with string and I’m carting mulch from the tree that the borough chopped up out front to the back yard to cover those spots. Over the winter, the mulch will kill the grass. In the spring I’ll just plop my new wooden frames on top of it. I’m not double digging, or even single digging, like I did with the last bed I made. I read a couple things that said it’s unnecessary and maybe even harmful to the soil structure, so why destroy your back. Sounds good to me! The downside is that if there are any tree roots or giant boulders under there, I won’t know. Here’s some of the string, before I put the mulch down. In total I’m adding at least 136 square feet, not including a potential pumpkin patch on the south side of the house and long rows of garlic and onions around the whole thing (Uncle Sal says this is good for pest control).

Last week we had some pretty good meals, especially considering it was a busy week.

The kids had the chicken with something else, I forget what.

Wednesday: Chick Fil A — but hey, I got a wrap. This was the night of soccer practice for one kid and soccer pictures for the other two.

For various reasons, I ended up going to three different supermarkets for groceries. 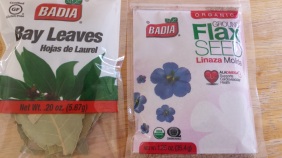 I tried to get a little creative at Wegmans, where I got my main order. I want to cook, puree and freeze the sweet potatoes and use them in pancakes, waffles or muffins. Same for the pumpkin. I’m giving this demerara sugar a try after reading about it on the October Unprocessed website. It’s somewhat less processed. I’m going to try to get away from standard white sugar and brown sugar completely, I think. The flax seed is for these homemade granolas cups that I’m going to attempt, and I’ll see where else I can hide it. So it seems that when I go food shopping with recipes in mind, I’m less likely to focus on the origin of the food. Hence the avocado, knowing I wanted to try to make the crema. Really, it should be the other way around — buy what’s local and in-season, and find recipes that work.

For yesterday’s trip to Wegmans, I had the kids with me, and we didn’t get there til 1, so it was more crowded than usual. Hence the trip was more about getting in and out alive than inspecting the origin labels on the produce. I let the kids choose a lot of things, and the strawberries they picked out ended up being really good, very sweet. Gemma and Sebastian ate nearly all of them yesterday. They’re out of season and from California but… once in a while is ok, right?

I also have a recipe for a chicken, spinach and cauliflower “rice” bake I want to try tomorrow night. Again, I just kind of grabbed those ingredients without thinking about it too much. I suppose cauliflower and spinach are fall veggies, though. They’re cool-season crops.

The weeks are flying by so fast. I still feel behind most of the time. Maybe when soccer is done I’ll feel less harried. I wish I could get back to that online gardening course I started in the summer. Maybe I need to stop reading Game of Thrones all the time (but it just got so good! Red Wedding!!)