I think I can make it one more day without going. I just didn’t feel like it in the least.

Just wrapped up the first weekend of fall. Friday night, I got to go out in the city with some friends. It made for a tough 9 am soccer game on Saturday, but well worth it 🙂 After the two soccer games, lunch, and cleaning up, I was ready for a nap. Thanks to my husband for taking the kids and their friend out! After the nap, when they came back, we were just hanging around outside, playing with friends across the street, and had a casual dinner of rotisserie chicken, canned corn and broccoli. Despite the nap, I was asleep on the couch again by 10 pm, the cool breeze blowing in the smokeyness of all the little firepit fires of the neighborhood, and the sounds of the end of a party at my neighbors’ that had been going strong all day.

Yesterday, I was up and at ’em early. The weather was simply gorgeous. After coffee, I went out in the garden and planted more garlic cloves, about 13 of them. In total I have 31 planted now, I think. I went around and pinched all the yellow flowers off the tomato plants, so that they may put their energy into ripening their green fruit before first frost. I also tried to get my new mum plant in the ground, but hit more concrete slabs in the front garden. Not sure if I mentioned this before but the one side of the front garden seems to have hidden chunks of concrete everywhere. It may be time to hire someone to just dig up that whole area, get the concrete out and put new soil in.

On Friday, I sat down and tried to really plan out next year’s garden, and I’ve been working on this on and off ever since. I’m looking at about 1200 square feet of plantings, plus maybe a pumpkin patch on the south side of the house, plus maybe a green house somewhere, plus climbing plants like cucumbers and beans on my fence near the driveway. Again, this may require hiring somebody to dig out these spots and haul in new dirt. It’s not really something I can do on my own, and my back’s been a little funny lately too. But — if I had that much bed space, I could certainly grow all our own tomatoes, potatoes, onions, garlic, carrots, basil, cucumbers and beans, and then some. I used Uncle Sal’s book to get my plan going — he has several plans in there.

I’ve been eating more of my garden carrots lately. They do seem to be sweetening back up with the colder weather. However, the longer they are in the ground, the funkier they look: 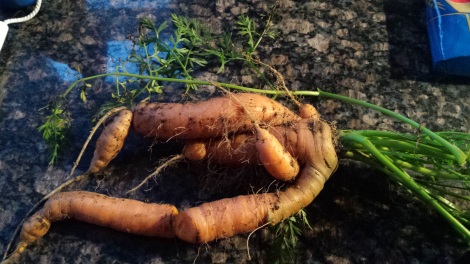 They clean up just fine though.

So back to yesterday: after the garden, it was time for Aidan’s travel soccer game. It was fun; my inlaws came, and Gemma and Sebastian had fun playing with the other younger kids there. They lost, but for Aidan the sting of losing was quickly erased once the Eagles beat the pants off the Steelers later on.

For dinner, the kids had mac and cheese and hubs ordered food, but I took the rest of the meat off the chicken and made chicken salad (with one of my own onions). Tasty, and that’s my lunch for today too. I also need to get some stock going with the carcass.

Last week was quieter than the prior week. I managed to get some important things done on the to-do list. We ate in Monday, Tuesday and Thursday; Wednesday we had pizza at my parents’ house for my sister’s birthday. Friday we had… more pizza. Tuesday was my best night. I made a taco salad with ground beef, iceberg and Romaine lettuce, tortilla chips, avocado, and cheese, with ranch dressing and lime juice drizzled on top. The craving for it hit me while I was at Wegmans so I was able to get everything. As yummy as it was, the best part was seeing Sebastian eat taco-spiced ground beef and say, “It looks weird, but it tastes delicious!” I don’t think he’s ever eaten ground beef before, let alone meat with spice.

I ate the leftovers of this in varying ways throughout the week, including nachos. 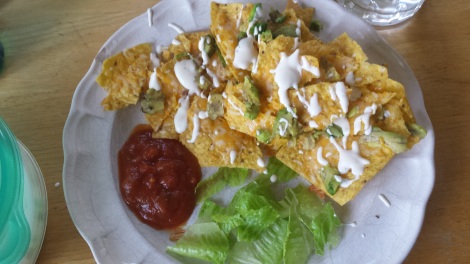 Anyway, I was also able to get back to using reusable containers for the kids’ lunch food and drinks. This despite the continued not-working dishwasher. I just don’t feel like spending the money on it. Plus I was kind of tired of the monotony of loading/unloading the dishwasher. Washing dishes is something new. (Sad, right?)

Last week I also reupped with Verizon, and cut about $60 from our monthly payment. But this required getting rid of some TV channels. Most of them will never be noticed, but one will… Cartoon Network. The kids cried, literally cried, when they went to punch in ol’ 757 and it was gone. I tried to explain it all to them, but I ended up just going all Grandma on them (“when I was young i had 3, 6 and 10… that’s it!!” (not exactly true)). But this morning I came down to find them happily watching CNN, so life goes on. (“Mom,” says Gemma, “is Donald Trump a real person?”)

This week… more garden planning, PTA stuff, top-secret meetings about chickens (more on that later), and hopefully, getting to some farmer’s market somewhere. I haven’t been to any since school started. My garage freezer is getting full thanks to the bounty of my garden and the summer market: 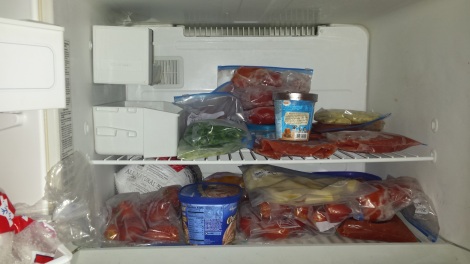 but I want to see what’s at the fall markets.