Yesterday, Saturday, was like a little oasis wedged in between crazy days.

Gemma and Sebastian had soccer, but those games are laid back. The kind of games where if one of the kids on the sidelines finds a frog and shows it to the kids who are playing and they all leave the game and race down to the pond, it’s funny and not that big a deal to the coach. (Hopefully.) 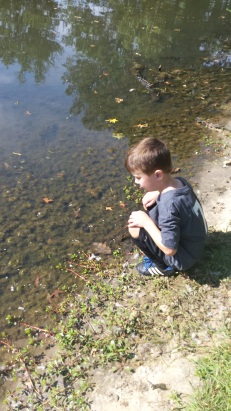 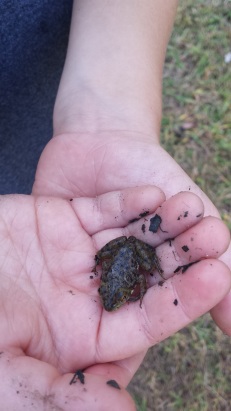 We were done by 11 and then I had a long afternoon to putter. I started by cleaning up a little — last week was so busy with school, soccer and PTA that some tasks fell by the wayside. Laundry, vacuuming, guinea pig cage maintenance.

Then it was into the garden to harvest basil. I made another batch of pesto to freeze. It was so good I had to eat a little right then, spread on some Italian bread. 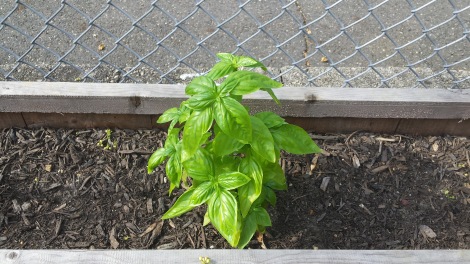 Since the pesto required but a splash of lemon juice, I looked up “can you freeze lemons?” and sure enough, you can. So those halves went in the freezer, tightly wrapped.

I also decided to slice and freeze some Honey Crisp apples that had a few bruises and were in danger of becoming food waste.

Wrapped up the day with a meal out, just me and the kids. We went to Amy’s Omelette House, where kids eat free on Saturdays. First time we ever went there. The food was pretty solid, diner-like, and it was only $32 including tip. (Basically, we ordered two adult meals and therefore got two free kid meals.)

Today, I really need to get into the garden and plant my garlic cloves. I used a few of them in some cooking and it was very good, so I’m looking forward to harvesting them next year! (That’s how garlic works.) I ordered them from Baker Creek, like my other seeds.

Last week was busy, as I said, but fairly frugal. Cooked most nights, ordered pizza one. The meals were highly similar to what’s on the school’s cafeteria menu, but cheap, at least. I had one fast food lunch. I made gravy Wednesday afternoon to have Thursday night, using one of my onions and 30 ounces’ worth of my own peeled tomatoes (plus storebought paste and sauce). I think it came out good, although I was in such a rush that night I hardly tasted it.

So many tomatoes. I think it may be time to start pinching off the new flowers to make sure the green fruit ripens.

I also was excited to find some great deals at Acme when I had to run out to get chicken and sausage for the gravy. For $9.94, I got a “manager’s special” pack of chicken drumsticks, a pack of sausage, a container of black pepper, a 2-pack of soap, and toothpaste. I love Acme’s clearance rack. It’s always worth a look. 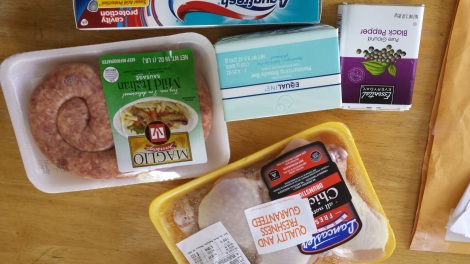 Sorry, I don’t even have time to rotate that picture right now! I have to get that garlic in and then get ready for the soccer main event — Aidan’s travel soccer game. No frogs allowed.