In a subterranean home theater with leather recliners where the thermostat reads 65 degrees, watching Mad Men from start to finish.

At that restaurant in Atlantic City where they keep it really cold inside and they serve chilled vodka at tables made of ice blocks (or something like that).

I’d rather not be here, where the window units have been droning for days and days and the TV gets turned up ever louder to be heard over them. Where the heat index Saturday night at 11 pm was still 101 degrees.

I should try to not let it bother me. Heat, in general, doesn’t bother me that much. If we just went to the pool it would probably not be that bad. But I’m a little tired of the pool. And this heat is so extreme, it just irks me on principle.

Oh well, just another four or five days of this to go…

Last week went by fast. I spent another expensive morning at the vet’s when my cat got sick. I did a lot of major cleaning — that’s one thing the heat has been good for. If you’re stuck inside, might as well clean. The kids helped me with this, especially on Monday, which I designated “No Fun Day.” The previous week, I had been writing little lists of chores for them on my whiteboard. It was working well — I could tell they liked crossing chores off the list — until Sebastian got his hands on a red Sharpie: 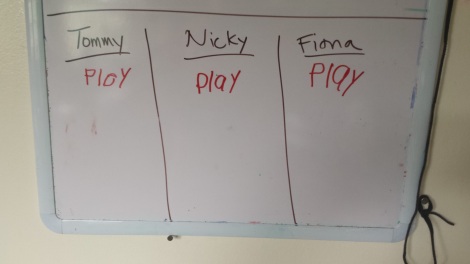 I also got the remaining soccer gear we needed (but then forgot about practice with the club trainer Friday night — oops). Luckily Sebastian can use Aidan’s old cleats and shin guards. Today we knocked out some of the school supply shopping — only after first “shopping” at home to see what we already had.  Fully half of Aidan’s notebooks from last year were barely used, so they are going right back this year, with the first few pages ripped out.

Tuesday night (bargain night, of course), I saw “Bad Moms” with some friends. Oh my! It certainly taps into a certain vein of mom frustration (rage?). Kind of surprising that it was written by two guys. As PTA President, I resolve to start using PowerPoint at our meetings… and to recruit some Hot Widower Dads to our school.

And somewhere in there, there was more pool time and a birthday party for my brother and more food preservation. Another batch of garden tomatoes turned into sauce.

Some tomatoes have been invaded by worms — those I have been using for the guinea pig. Some get those “stretch marks” — I need to look up what causes that. Most of the tomatoes are that small plum-type, but some are regular shape and gigantic; again, I don’t know why. In any event, if I see anything I don’t like when I shuck the skin off after blanching, I cut it off.

I also shredded and froze some zucchini and yellow squash — I believe these came from the “local” stand at Wegmans.

I planted some lettuce seeds and pumpkin seeds on Sunday.

Wednesday evening, we went to the farmers’ market, where I had corn fritters for dinner and they had French fries and ice cream. Really, it was too hot. We stayed long enough for the kids to dance to the music, then I grabbed some corn and we were out of there. I skipped Saturday’s market due to the heat too. 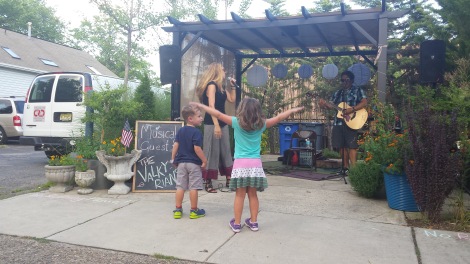 Thursday, I made this Boston Cream poke cake that I saw on Facebook. Didn’t get around to making the icing til Saturday, and finally ate it Saturday night. Gemma and I liked it, but the boys not so much. Basically yellow cake infused with a vanilla pudding+condensed milk mixture. I do like me some cold creamy desserts when it’s hot out.

I think we managed to avoid eating out except for the farmers’ market, one lunch at Target, and last night when we ordered Mexican food from a downtown restaurant, Oasis, that was really good.  I didn’t cook much; lots of cold sandwiches and cereal and stuff. I continue to slowly work my way through the basil in the garden, two or three leaves at a time on my caprese sandwiches (minus tomato, adding mushrooms).

This week: getting ready for the Shore next week. More tomatoes to process; more peaches too.  Kid sports stuff every night of the week. More cleaning. No spending money if I want to have any to spend at the beach.