Some days this week were sooooo long and some were over in a blip.

One long morning was spent at the vet’s office trying to coax a guinea pig to stay among the living. Three hundred dollars later, I had 3 kids sobbing in the backyard while one of them laid a cement block inscribed “RIP Oreo 2015-2016” (in red Sharpie) on a fresh grave.

Wednesday felt long too. I resolved in the morning to stay home all day and get stuff done, and keep the kids amused with playdates. So while Aidan had two friends over (and then went to his friend’s house later), I was doing laundry, hanging it on the line, re-wrapping some of the tomatoes with bird netting, tying up the tomato plants, picking cucumbers and making more pickles.

I also spent some time switching all my bills over to my new bank account. I’m in the process of leaving TD Bank, angered by its new policy of counting transactions in strict chronological order. Before, deposits were counted first, so I could always save myself from bouncing a check by running to the bank and depositing cash. I tried to get used to the new policy, but countless overdrafts later, I’m over it and ready to take my business elsewhere. It just seems like a money grab on their part, to change the policy in that way. I know I’m just another angry financially challenged person looking for some big institution to blame, but still. There’s principalities in this, Smokey.

It’s hard to keep up with the cucumbers. I need to go buy more jars today. Luckily, the hubs has given the pickles the thumbs up, and he is a real pickle connoisseur.

Anyway, Thursday, Friday and Saturday seemed to fly by, and now here we are on the last day of July. I can’t believe it.

After a seemingly endless heat wave, we are back in the 80s. I hoping this will make the tomatoes turn red. I know that temps above 90 inhibit ripening. One tomato is nearly all red, but I need the rest to catch up so I can use them all at once.

The heat was also hard on the pumpkins. Every afternoon the leaves would completely wilt. I looked it up, and it’s an issue of the root system not being developed enough to get the water to the leaves (not a lack of water). So I gave them some bonemeal and put dirt over some of the nodes where leaves and flowers are to encourage root growth. And I’ve been trimming the dead leaves and flowers. I’ve got one baby pumpkin. The other two rotted 😦 I hope the plants improve.

I was able to preserve more food this week. Tuesday, I took leftover corn on the cob from Monday’s dinner, sliced off the corn, and froze it. Why I’ve never done this before, I don’t know. I also blanched and froze my farmers’ market broccoli, and the rest of the green beans. 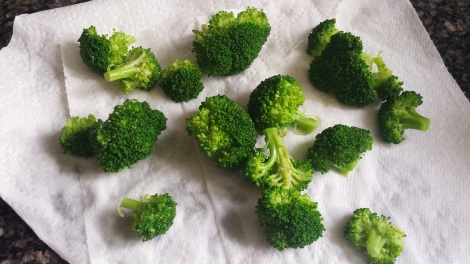 And, on Friday, I harvested a bunch of basil and made pesto! Minus the pine nuts, of course, which technically makes it pistou. But tastes about the same to me. I froze it for the future. It’s nice to see the freezer/fridge filling up. I had to move the pickles out to the garage fridge and will need to move some freezer items soon too. 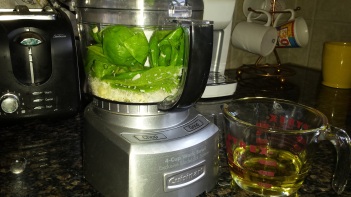 Wednesday night, I took my farmers’ market eggplant and made eggplant fries. Mmmm. But I was the only one who would eat them. Also, eggplant seems to irritate my mouth. So I probably won’t buy eggplant too much in the future. Still, I’m starting to really enjoy these moments where I get out my cutting board, my good knife, and my veggies, and I’m like, Let’s do this. Especially when it’s a veggie or recipe that is new. I don’t think I had ever cut up an eggplant before. It certainly has a unique texture. 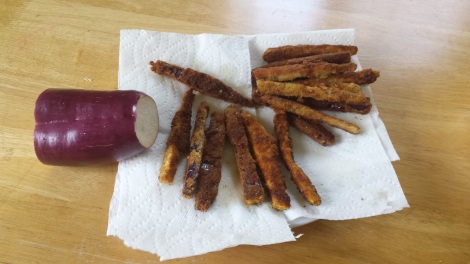 We did get some pool time in, in between thunderstorms and housework and food preservation. We also have jumped on the Pokémon Go wagon. I think it’s fun! We went to the park on Thursday and the kids made some new friends and roamed all over.

I may be wrong but I want to say… that we didn’t eat out all week. The only thing I can think of is Tuesday night, when I had a meeting and grabbed a wrap at Wawa afterwards. One night I made spaghetti, and we ate the leftovers the next night. I think my husband ate it a third night, even. Friday evening, the kids went over my parents and had pizza while I stayed home, ate an egg salad sandwich, and watched Soapdish. It might have been the best night of my week.

In other frugal news, I cashed in my Swagbucks account for a $25 Paypal credit. I haven’t done any Swagbucking in a while, and I heard that they’ve made it a little harder to earn points. But I was glad that I remembered to cash in what I already earned.

I gave my room a thorough cleaning on Thursday, and in the process found some stuff to sell. The listings are up and there was interest, but no sales yet.

I also had a great shopping find — Stride Rite sneakers for Gemma for $22, online. And she loves them, and they fit. I wanted to save them for the start of school, but she loves them so much that she’s wearing them everywhere.

Speaking of kids, they have been eating a lot of fruit, which makes me happy. But it’s not local. It’s grapes, strawberries, and clementines from the supermarket. I can’t seem to get them into peaches or nectarines, and they definitely don’t like blueberries. They don’t even like watermelon. How can that be? That was such a treat for us when I was a kid.

We wrapped up the week with another trip to Ocean City, for my nephew’s birthday. It was great to have some beach time with my mom and sister, and the kids had fun together.

I guess I will focus on cleaning today. And pickling. Sometimes at night when I’m trying to fall asleep, I list everything that I’ve been able to eat from the garden this year. It’s soothing to me. I always start the garden with super low expectations, like, if one thing is edible, I’ll be happy. So by that standard, I’m doing quite well.