Patting myself on the back after throwing a fairly frugal sixth birthday party for Sebastian on Saturday. Of course, summer birthdays are pretty easy to do on the cheap. Kids + water = fun. I spent $50 on a 10-ft long blow-up pool and a slip-n-slide with a little ramp. We can use these all summer long. I spent another $50 on supplies, including things to put in the goody bags, several medium-size water guns, cake mix, lemonade mix, cupcake papers, and a pinata. Before I went to Target for those things, I took a good look around the house and determined that I already had apple juice, soda, water, brownie mix, sprinkles, tablecloths, the ingredients for cupcake frosting, and plain napkins. I found shark-themed goody bags, plates and napkins that I had been saving from a party Aidan had several years ago. At Target, I found a big box of small puzzles in bags featuring all different characters (Minions, Barbie, etc.) that was on clearance for something like $4.38. I guess puzzles aren’t a hot item, but hey, we like them in our house, so into the goody bags they went.

Then when it was time to order pizza, I used two gift cards to a local pizzeria that I had won back when I went to a basket raffle this spring. It wasn’t free, but it helped. I ordered too much pizza, again, but that’s a whole other issue.

I spent Friday night cleaning up the back and side yards, and they look much improved (to me, anyway.) The kids were pretty useless that night, but I did make them help clean up before the party. I was up by 8 to get the baking done before it got too hot. My husband was in charge of getting the water stuff blown up and putting candy in the piñata. That was a budget-buster right there, as he stuffed that puppy with a ton of candy. As there were only 9 kids, each kid went home with a Halloween-bag amount of sugar (I’m sorry parents!).

So I’m not sure what the exact total spent is, but it was certainly less than what I would have spent if I had had the party at Bounce U or Chuck E Cheese. And it was relatively little work, and just as much fun for the kids. Mainly, I’m pleased that I took the time to really make a list before going to Target, and that I didn’t deviate from it. I didn’t have that party freak-out moment and just start dumping stuff in the cart. 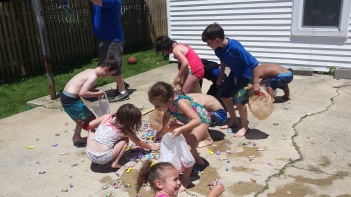 Later, after dinner, I dumped the pool, refilled it with clean, very cold water and took a dip myself. I just took in the gorgeousness of the weather, the beauty of the trees and sky, and the fact that school is really truly over and I get to be lazy for a while!

Garden update: The pumpkins have sprouted. The runner bean flowers are pretty, delicate blooms of red and pink-white. The onions, carrots, and tomatoes are big and bushy.

Last week was not a good food week. I was sick, the kids were sick. Sebastian was home from school two days and so was Gemma (different days). I was busy with school stuff. Fast food was eaten. There may have been a “cereal for dinner” night. I’m not going to dwell on it. I did, however, finally find a use for this bag of frozen spinach that I got from Winter Harvest that’s been sitting in the freezer: I made quiche. It was really perfect because I also had a glut of eggs and lots of dribs and drabs of cheeses that needed to be used up. So it all went into 2 quiches. Pretty tasty and easy! (I used pie-crust-in-a-can.) The leftovers were sliced up and frozen. Nobody ate it except me, my dad, and my friend that I pressed a piece on, but I bet I could get the kids to eat it with broccoli in it. Maybe. Definitely a good way to use up whatever you have on hand.

The first picture below shows the pie crust filled with black beans, my make-do “pie weights.” For this recipe, I had to “blind-bake” (pre-bake) the crust for 8 minutes, with pie weights holding it down, to keep it from puffing up. Google told me that beans could be used, and luckily I had a bag.

In frugal pet news, I took the black-and-white cat up to Monster Pets on Wednesday night because the SPCA was there giving low-cost vaccinations. Neon/Enemy/Mr. Wuffles got 3 shots for $50, and they didn’t even have to take him out of the carrier. Next step is neutering on the cheap.