Last night I finished reading Animal, Vegetable, Miracle by Barbara Kingsolver. I mentioned in an earlier post that I thought it would be a game-changer, and now that I’m at the end of it, I’m convinced it is.

First, let me recap the book. 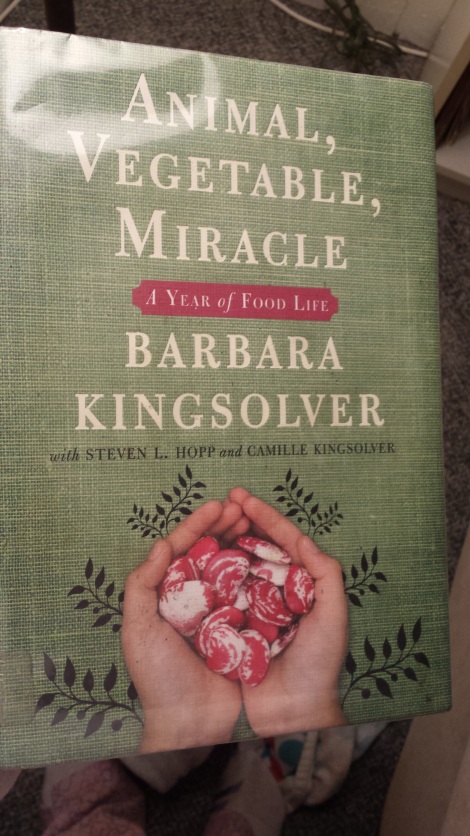 Kingsolver, her husband, and their two daughters permanently move to her husband’s farm in Virginia, after spending many years dividing their time between the farm and Phoenix. They decide to spend a year trying as hard as possible to eat local: to live off what their own farm produces (fruits, vegetables, chickens, turkeys, eggs, mushrooms) and the food offered by neighboring farms and farm markets (meats, dairy, more). They even try to get things like flour from as local a source as possible. This isn’t a total stretch for this family; they’ve kind of already been moving in this direction for a while. But this is their attempt to eat strictly local, which means strictly in season; to learn more about all the issues involved with such a lifestyle; and to record it for purposes of the book.

The bulk of the book is written by Kingsolver, but her husband contributes sections, usually on political topics, and her older daughter writes some chapters from her perspective and includes recipes.

The book is a great read for anyone (Kingsolver is a novelist): entertaining, thoughtful, wise, emotional. But for me it was like a call to action.

Learning about frugality and nonconsumerism these past couple years has been great. But I’ve always been drawn more to the nonconsumer part of it than the frugal side. For me it’s not so much about saving money as fixing my mindset. I will gladly spend money on something that is worth it to me. I don’t take particular pleasure in watching a bank account grow — it’s always half spent on something in my mind. The challenge has been to look more closely at what society thinks we should spend money on and whether I agree with that.

Redirecting my spending from other things back to quality, healthy food resonates with me. I’ve resisted this for a while. The idea that food should be cheap has been with me since childhood. Food was just something you needed and you tried to spend as little on it as possible, most days. Coupons, supermarket specials, the Can Can sale. Not that we didn’t enjoy food and even revere it in some ways. And we did try to eat healthy and in season and avoid processed foods. But if you had me draw up a pie chart of expenses, I would have given “food” a very small slice. I neither thought food cost all that much nor believed it should cost that much. It was just food. Not a vacation or a new bike, nothing exciting.

But Kingsolver has spun me in the other direction.

So why is it important to eat local?

One important reason, for Kingsolver and family, is to combat climate change. When food is trucked thousands of miles from its origin to its final dinner plate, that uses fossil fuels and contributes to global warming. The less distance the food has to travel to you, the less impact on the environment. (Also, oftentimes, the more ingredients in a product, the more travel: all the ingredients had to travel from their points of origin to where the product is made.) I have read at least one article recently that slightly debunked this concept of “food miles” being bad, but generally, it makes sense. Not to mention that the farther food has to travel to you, the less fresh it is likely to be.

Buying locally thus helps the environment, gives you the chance to experience fresher food, and also supports local farmers so that they can stay in business. One of the most dismal chapters in the book talks about when a local group of growers loses out on selling their fresh tomatoes to a local supermarket chain because at the last minute, California tomato growers beat them on price. Buying locally also usually means buying organic fruits and veggies and grass-fed, humanely raised meats, since small farms tend to offer these benefits.

Buying local also tends to support diversity of seeds and breeds, making for better-tasting, healthier food. Of all the turkeys consumed by Americans every year, 99% are a single breed: the Broad-Breasted White, bred to be so heavy that if it lived past the Thanksgiving slaughter, its legs would collapse and it would die anyway. “All the special qualities of heirloom vegetables are found in heirloom breeds of domestic animals too,” Kingsolver writes: “superior disease resistance, legendary flavors, and scarcity, as modern breeds take over the market.”

All right, so what does all this mean in practice? Kingsolver starts her year of local eating in early spring, perhaps the hardest time to start. In Virginia, not much is growing yet, and their stores of food preserved from the previous summer are dwindling. When the family yearns for fruit, local eating means they can’t just go to the supermarket and buy bananas from Central America or strawberries from California. Nope, it means they go to the farmer’s market and buy what’s available; in this case, rhubarb, “big crimson bundles of it … loaded with vitamin C and tarty sweetness… a fine April stand-in” for fruit. Oh yes, get ready to expand your eating horizons.

But spring, summer and fall bring the bounty: the family plants and harvest all kinds of vegetables and fruits, and invest a good deal of time transforming some of the harvest into things they can use over the winter to come: spaghetti sauce, pickles, pestos, other kinds of sauce, frozen vegetables, jams, etc. Kingsolver points out that the non-farmer can buy the produce from a farmer’s market and store it in the same ways. I can’t find the line right this second, but she basically says that it’s win-win for you and the farmer if you buy him out of tomatoes in August and preserve them. The farmer gets paid when he/she needs to get paid (because unsold tomatoes will be worth nothing later) and you get fresh tomatoes instead of buying some terrible-tasting ones in January.

When the family gets to January, and people who know of their experiment ask, “What are you eating now?”, the answer is a full pantry and freezer of put-up foods as well as a root cellar full of pumpkins, squash, carrots, and so on. When the year-long experiment wraps up, they don’t immediately race to the store to buy the forbidden fruits. They simply continue on. (With the caveat, Kingsolver explains, that they might grow less themselves the coming summer and rely more on the farmer’s markets so that they can have time for a beach vacation. I have to agree with that.)

Some things are tough or impossible to replace with local versions. Grain, coffee, olive oil, chocolate chips (ok, that last one is mine, not hers). But to start with the idea that you’re going to eat what’s local and in season, rather than the blind faith that if the supermarket carries it, it must be OK: that’s the point. Fruits, veggies, eggs, dairy, meats: just looking at those from this new perspective equals a big change for most people.

You really have to read the book yourself. I can’t do it justice here. So much good information, as well as musings on slowing down and enjoying food and the making of it, and some really funny stories about raising turkeys.

I want to add that I don’t want to demonize supermarkets. There are plenty of inner-city neighborhoods around here that would benefit greatly from having a supermarket. And I often see signs in our supermarkets touting the local provenance of certain items. Conversely, the little farm down the road is not necessarily pesticide-free and humane. You have to do your research, as always.

“Six Impossible Things Before Breakfast” (a line from Alice in Wonderland) is how Kingsolver titles the chapter on learning to make her own cheese. I now have to wonder what impossible things we could do around here before breakfast, or for breakfast. Could we give up our Eggo waffles? Our Cheerios? Our bananas? Or, perish the thought, our beloved Slim-Fast shakes?? Could we eat (single-ingredient) oatmeal with fruit in season?

Of course these concepts are not new to me. Just yesterday I told my daughter “no” to strawberries and watermelon in Whole Foods, because it isn’t the time for them. But to go full-local, to emulate the book…? 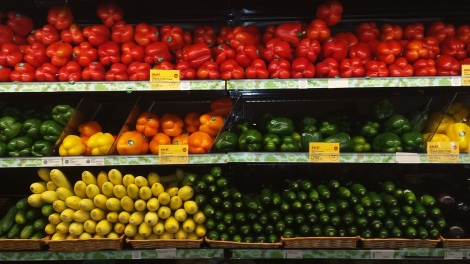 Where did you come from?

One response to “Six Impossible Things Before Breakfast”