Note: I’m feeling terrible about the Paris attacks. But here is an entry I started yesterday before hearing about them.

If I could take one week out of the past two years and hold it up as an example of how I want to be living, this past week might be it.

This week I said “no” a lot. No to Wawa coffee. I stayed in and used the Keurig. It’s cheaper, simpler, and fewer calories. Environmentally, I think it’s a wash. I’d have to learn how to brew my drink of choice at home and get rid of the pods to improve on that front.

“No” to fast food lunches and takeout dinners, with only 3 small, cheap exceptions, which were occasioned by illness in the family. You have to understand that there’s a part of my brain that is constantly, reflexively asking to eat out. So I am constantly saying “no.” Any meal that I make at home is a victory. Maybe someday that won’t be the case anymore.

For the first time in a long time, I really, truly took a hard look at what food was here and planned meals around it. When I went grocery shopping, I pretty much only bought what we needed for this week. The cupboards are bare today, let me tell you. We are using stuff up. A box of graham crackers that expired in July, that was never opened… they went in my daughter’s lunch every day. In the old days I would have tossed them just based on the date. But they were perfectly fine. Three Stayman apples from the farmer’s market, that were a little tart for eating? They became a small apple crisp, which also used up the end of a canister of oats that were (technically) expired. Mmmm. One of my favorite desserts. (Kids didn’t eat it, but hubs and I enjoyed it). A yellow squash that we never got around to eating? Cooked, pureed and froze it. It can go in desserts and other things. A quart of buttermilk, that I bought for some recipe but never used? Froze it, in plastic bags in one-cup portions. 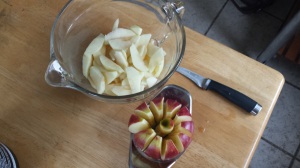 Here is what I bought on Monday at Acme. I lined it up from healthy, nonprocessed on the left to less healthy, more processed on the right. Just trying to get a feel for what I tend to buy. (Bonus, I got a free turkey after cashier gave me a coupon for it that previous shopper didn’t want.) It was about half and half. Some of those things I really don’t need to be buying. The frozen carrots and the cocoa packets are convenience foods. I could make that at home myself. Same for the chicken nuggets and canned chicken soup, really. Cheerios and hummus, I’m unlikely to make at home, although I wouldn’t mind giving hummus a try for fun, sometime. The Chef Boyardee… they were on sale, and they come in handy in a pinch, for my husband only. The Wheat Thins were terrible, unbearably salty. Won’t buy them again! 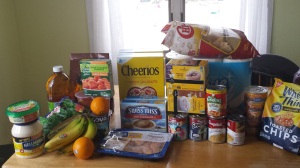 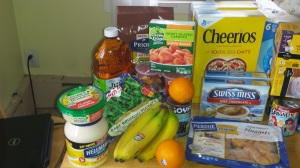 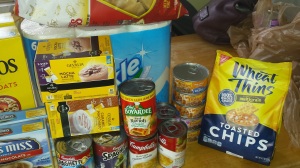 Speaking of carrots, these are thriving. Wish I had done a bigger planting. 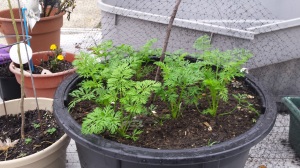 Tuesday, I sold some crib bedding for $10 (through craigslist), then picked up a few more things (milk, yogurt) at Wegmans. Yesterday (Friday), I shopped downtown in the morning and was able to get everything I needed on the Avenue — at the hardware store, where the man behind the counter helped me find the screws and light bulbs I needed, and at Sara’s Produce (bananas, mushrooms). Yay for not having to drive to Home Depot. I also dropped more stuff off at the Nesting House. (And I stopped in at the newest bakery, Constellation Collective, and brought home a delicious piece of quiche and a chocolate chip cookie with black salt. This was one of my three exceptions. Gotta support the new businesses!)

After lunch I did tons of wash and dove into a new project: transferring all my photos from Google backup to my computer and Snapfish.

For dinner I dug out two NY strip steaks from the freezer. My husband had bought them over the summer, probably thinking he would grill them. I marinated them using this, then fried them in oil and butter. They were the best steaks I’ve ever made. A nice way to end the week, especially since the middle of the week featured a lot of soup and grilled cheese sandwiches.

After dinner, I drove about 25 minutes to pick up a winter coat for my younger son from a Facebook yard sale, for $8. I took the kids, and on the way home we cashed in some Wendy’s Halloween coupons we had for free Frostys for dessert (granted, they were the tiny size).

I should mention that a lot of this is being driven by the fact that last Friday, my husband and I drew up a family resolution wherein we resolved to eat out/get takeout only once a week, to exercise 20 minutes a day, and more. The kids are involved in it too. So it’s like one big push to lose weight/be healthier/save money. I’m excited that it was his idea.

So I’ve got to keep this momentum as we get into the season of my son’s birthday, Thanksgiving and Christmas. Lots to do today, but hoping to get some family exercise in. I need to sit down and plan out Thanksgiving, who’s bringing what, etc., and figure out what to have my son bring in to school on his birthday. Perhaps most importantly, now that we literally have no food in the house, I’m going to have to food shop tomorrow, and try once again to keep it targeted.