I roasted pumpkin seeds today. They smelled great! I wish I liked eating seeds. Hopefully my husband will go for them. I have lots of seeds because at the end of last week, I gutted another pumpkin. This guy yielded 2 cups or so of puree, maybe more. 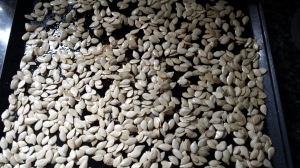 This leaves me with 4 pumpkins sitting in my dining room, and 5 on the vines outside. Might be time to give one or two away, because I am really too busy to be pumpkin processing all day long.

Last Saturday, we had sautéed tilapia for dinner, with homemade Rice-a-Roni aaand…. corn from the yard!

Now. It wasn’t the best corn I ever had. The kernels are smaller, and you have to eat like two of these ears to feel like you’ve eaten one conventional ear. The taste was good, but there was a certain… earthiness to it. It wasn’t as sweet as I expected. They tell you that corn starts losing sweetness as soon as its picked, so I figured that since I literally picked them, shucked them, and boiled them, one-two-three, they’d be super sweet. But not so much.

However, the convenience of stepping outside and picking corn for dinner was awesome. I’ll figure out what I need to do to get them sweeter. It’s also possible that they weren’t quite ready to be picked, although they had all the signs: silk had dried up, the juice in the kernels was milky, etc.

Saturday was one of those nice homey days. Nice weather, hung out some wash, roasted the pumpkin. The kids played with various friends all day. We ate up the food left in the house, in preparation for going down the Shore the next day.

Good times at the beach on Sunday and Monday. We stayed over one night in a motel that was right off the boardwalk. Great weather on Sunday, although the ocean was rough. The motel had a pool, and we ended up there later in the afternoon. Nothing like swimming while the scent of caramel popcorn wafts over you!

We did the rides that night. 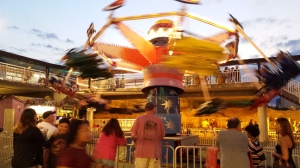 On Monday, I’d hoped we would just go back to the beach. It was free (the motel provided beach tags), and I didn’t feel like I’d gotten my fill the day before. But everybody else wanted to go to the water park next door, so that’s where we went. It was fun, but not worth all the money, especially since we had to leave early after my husband hurt his knee.

Anyway, it was good to get away, and I know the kids loved doing beach stuff and pool stuff with my husband for a change. We also got to see my best friend and her kids.

Now this week is almost over. Today was another breezy beautiful day. Any day where I can open the windows and not run the AC is a great day. The kids kept themselves occupied all day long and I did wash, PTA stuff and shower stuff. Seriously, it was almost creepy how well they played, alone and with their friends. Legos are the best invention ever. My younger son plays with them all day long. It was such a non-stressful day that I’m sitting here feeling like it almost didn’t happen, if that makes any sense? It just flew by.

This weekend is my sister’s wedding shower. Then it’s one week until her bachelorette party and our week at the Shore. School starts the week after that!