Today was a little cooler and less humid, so I decided to start roasting and pureeing some pumpkin. One of the first pumpkins I harvested was starting to go bad in one spot, so I decided to see what I could get out of that one.

I followed The Pioneer Woman’s post on the process. First. I cut the top off the pumpkin. Then, I sliced it in half and scooped out the guts and seeds (and saved the seeds). The rind was pretty tough, and the cutting took some time and upper-arm strength. Once the guts were out, I put the two halves on a baking sheet and baked them for about an hour at 350 degrees. Once baked, the flesh separated from the skin fairly easily, although I still had to use a knife (perhaps because the halves sat out for a while because I got distracted). 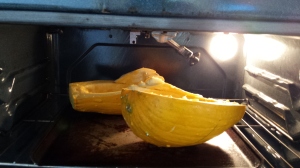 Then it was time to puree the flesh. I really need to get a food processor, because a blender just does not do as good a job. But eventually it was all ready. I got about 1.5 cups out of this pumpkin. I probably could have gotten more, but I really didn’t want to go anywhere near that messed-up spot. Also, I just got tired of trying to get the skin off. Also, I didn’t really want too much from this pumpkin because it was kind of weird looking. I have two plants that are producing cute little sugar pumpkins (see pic below) and two that are producing these elongated, squash-looking specimens, even though I thought they were sugar pumpkin seeds. It probably won’t matter in the end, taste-wise, but…

I separated the puree into half-cup portions, and into the freezer it went. I think I will do this with all the pumpkins that have already been picked. The ones that are still on the vine, I will try to save for Halloween by curing them. 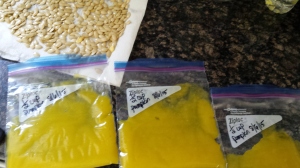 I can’t wait to try roasting the seeds. I had saved a bunch from an earlier pumpkin, but my younger son decided he needed the plastic bag they were in, so I found them dumped in the sink. My husband loves sunflower seeds and pumpkin seeds. Unfortunately, some animal chomped the heads off my sunflower before I could do anything with them.

Some animal also took a bite out of one of my tomatoes.

But I blanched, skinned, and froze the other two.

This was my harvest last night:

That skimpy carrot had started going to seed on top, it seemed, although I thought carrots did not do that until the second year…? And once that happens, the plant siphons off the root to grow the seeds, so I guess that’s why that carrot is skimpy. I probably should just pick all the carrots, but I don’t want them to get wasted.

And the corn. Oh, the sad ear of corn.

This was from the first corn planting, when I just did two corn plants mixed in with the pumpkins. I’m hoping the ears from the corn-only bed (16 plants) are better.

Here is a picture of the pink corn silk I talked about before. It’s all dried up now, but it was so pretty. 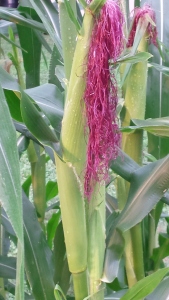 Well, the imperfect results and the guts and the skins… into the compost they go, to be reincarnated.