Spent a lot of time in the garden this weekend, and the result is another raised bed, planted with 16 hills of corn. Also, pain. Lots of pain. I’ve been having this issue for a long time with my left leg where I have sharp pain coming down from my back into my leg and lately also from the upper inner thigh; I guess I aggravated it over the weekend because it was really bad today. I suppose I should go to my doctor but first I will spend some more time hoping it goes away.

Friday night, someone on the Facebook yard sale listed free dirt (she had just had a pool installed). So with the help of my brother-in-law, we got roughly two trash cans’ worth and brought it back home. It was pretty good dirt but some of it was rather rocky. At one point I was squatting there sifting it with the kids’ sand sifter. Not a very efficient way of getting the rocks out, but I was fascinated by how soft and silky the dirt was after it came through. I mixed that dirt with a few bags of garden soil and got the seed corn in there on Sunday night. My friend F. gave me some more seeds when she visited, including beans, parsley, and dill. And I forgot that I still have zinnia and hollyhock seeds. But I’d say the big planting push is over. The chapter of Farmer Boy that we read tonight was actually all about the spring planting and how they had to work like crazy to get everything planted on schedule.

It was dreadfully hot on Saturday. I could only work in the garden in the morning and evening. In between, I was inside doing stuff with the kids and washing sheets, and I ended up cleaning out and reorganizing the linen closet. Good God, what nasty old sheets I was hanging on to.

I also ticked a few other items off my to-do list that had been on there for weeks, so that felt good.

Sunday, I took the kids about an hour away to see my sister and nephew. We went swimming at a lake near her house and had the thrill of seeing a water snake zip by us.

This week, it’s all about the yard sale that we are having on Saturday. I hobbled up and down from the cellar today, carrying up big bins of old toys and stuffed animals. I want it gone! I have held on to too much for too long. I have some ideas for merchandising this stuff on the front lawn. Signage is going to be key. I want people to be able to see at a glance that these are summer girls’ clothes, size 18 months, $1 a piece. I’ve been to too many yard sales where I had no idea what I was looking at. But it’s going to take a lot of work and forethought. As long as we make $25 to recoup the cost of registering… I would probably give the rest away. The toys, anyway. Just take them. 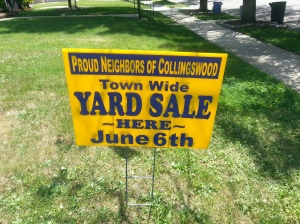 In addition, my sister’s shower invitations need to go out, and I am supposed to print the mailing labels, which somehow I’ve never done before. There’s some PTA stuff going on, and Little League playoffs. My dishwasher is broken so that’s cool. I skipped grocery shopping today, because there was a chance of downpours and thunderstorms (I love being my own boss). So that needs to happen early tomorrow. I’m pretty sure I am giving up couponing once and for all, but more on that later.

Today was a nice, chill day. It never did really rain, not until dinnertime; it was just cloudy and cool. Baby girl and I had a pleasant walk. Down the end of the street, on the back of the old animal hospital, we discovered this mural. It’s always been there but I never really looked at it before. 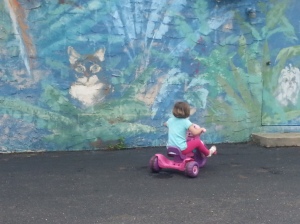 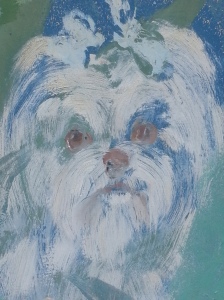