A major paradigm shift has occurred in our house with regard to dinnertime. For years, I have followed the pediatrician’s advice, which went something like this: Don’t make them eat foods they don’t like. Just give them several healthy choices and let them choose.

It made sense to me, because I could still remember the dinnertime battles of my youth. Sitting alone at the kitchen table with an undrunk glass of milk in front of me, as it slowly got dark outside. The gag reflex I felt whenever Rice-A-Roni was dished up, the slimy bright yellow pile of it. I totally get food pickiness. So I was understanding.

But lately, things had been getting ridiculous. My older son’s list of foods he will eat is embarrassingly short. Middle kid, just as bad. My daughter is the only good eater. I was starting to do what I swore I never would — make three different meals (or more) instead of one.

So last Thursday night, I made pork chops, broccoli, Jacques Pepin baby Yukon Gold potatoes, and I think corn too. Nothing exotic. Nothing classically repulsive, like Brussel sprouts. My oldest started whining as soon as he saw me cooking, as he usually does: “I don’t like that.” Even though he has eaten pork chops in the past. He also does eat broccoli, but he prefers it to be the frozen kind. He can tell the difference when I use fresh, which is what I had this night.

I don’t know what made me flip, this night, but I decided that they had to eat what was on the table, and if not, tough toodles. No substituting with cereal, which I’ve done in the past. Eat your dinner. If you don’t, no food til snack time, around 7:30 (we eat dinner at about 5:30), and it will have to be cereal or fruit, nothing junky.

There were a lot of tears, pouting, threats to turn me in as a bad mother. I don’t think my oldest or youngest actually ate anything. My middle made an effort and at least ate some of the potatoes, which was pretty good for him. It was a rough night but I stuck to my guns, and my husband is totally with me on this one. (Not that he will eat broccoli.)

Over the weekend, there was pizza, etc., so no confrontations. Last night, though, I made some very basic sautéed chicken strips and tri-color tortellini, and a salad. Plain chicken, plain pasta. Eat it!

The oldest gave me some more lip, but eventually ate a good bit of chicken, and tasted the tortellini. The middle ate everything I put on his plate, saying, with resignation, “I don’t like it, but I’m eating it, because I have to.” Yes. Somebody gets it. Baby girl did ok too.

I’m hopeful that if I stick with this, they will learn to like more things. I mean, they have to. They just have to. You can’t go through life eating mac n cheese and Cheerios. Like I said, I was a picky eater, but I still ate waaaay more things than they do.

Parenting seems to be mostly about figuring out when to come down hard and when to ease up. I think this was a case where tough love was required. When they were younger, I had more trouble knowing when to ease up. I was such a freak about schedules, rules, routines, probably more for my own need for order. My mother-in-law has a good story on this point. When my husband was a baby, she bottle-fed him according to a strict schedule. This was what the pediatrician dictated, and she also was worried about him being overweight because obesity runs in that family. So he got his four ounces or whatever and that was it. One day he was fussy, and she was outside with him trying to soothe him, and explaining things to the neighbor, and the neighbor said, “You know, Roseanne, some babies just need a little more.” So she took him in and gave him more formula, and he calmed down.

This story has come back to me many times over the past eight-and-half years. Whenever I was at my personal limit, whenever I thought the baby (or the toddler) should be doing so-and-so, because I had done everything I was supposed to do… When the baby would wake up in the middle of the night, and I would have to go in again… I would think, maybe they just need a little more. And a lot of times, that little more would do the trick.

But I suspect that going forward, it’s going to be more about cracking down than easing up…

Sunday was a busy day. Lots accomplished! I planted more sunflower seeds and more romaine lettuce seeds. I filled in one of the back garden beds with dirt (bagged and native) and planted the three yellow squash seedlings. It rained hard again, yahoo! Eight pumpkin plants have sprouted, and in the past couple days, about six little corn shoots have popped up. 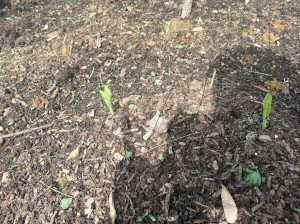 The roses have bloomed and smell wonderful:

Inside on Sunday, I put away a lot of winter stuff that was hanging around: hats and gloves and boots. I cleared the dining room table and sideboard of useless stuff that had been accumulating. Of course, later that evening, we went to a fundraiser and won two gift baskets at the Chinese auction, so now they are sitting on the sideboard. Stuff! It never stops. I signed up for the town-wide yard sale on June 6. Can’t wait to get some stuff out of here — if it goes out to be sold, it is not coming back in.

Little League is winding down. I need to figure out if we are going to join the Y or not, buy our pool passes for the town pool, and otherwise figure out what our daily schedule is going to look like this summer. I need to fit in exercise. A new store is opening downtown — well, because it’s called “Upcycle,” I thought it was a thrift store or something. Nope, it’s a spin class studio. Disappointing! 🙂