It’s nearly identical to “Big Country Blue,” the blue from Benjamin Moore I had settled on. But now I think it’s too turquoise, i.e., it needs to be more indigo/violet-ish, in order to work with the pink paint and the browns of the quilt.

So I’m thinking about Starry Night Blue, or Blue Suede Shoes, from Benjamin Moore, or Frank Blue or Honorable Blue, from Sherwin Williams.

Or I could just leave it the way it is, and save a lot of time and money.

This has been going on for weeks. First I was looking at teal/Tiffany blue shades. Then I decided I wanted more of a true blue. Add to the mix the fact that the color on the cards never looks like what it looks like on the computer screen or the final result in the can. Yesterday I realized that there are color-matching apps, so I downloaded ones for both Sherwin Williams and Benjamin Moore. Wish I had found them sooner. I took a picture of a picture frame I have that sort of represents the blue that I think I want now, and that’s how I came across those SW shades above.

And on top of all that, because I’m a words person, I want to like the name of the paint.

I have all this time to dither because work has been slow on the trim. However, my husband tells me it will all be done after Friday, and then I can actually start doing stuff in the room.

On Sunday, I bought a cute, rustic-looking star-shaped mirror from the Facebook online yard sale, for $5. Can’t wait to start actually hanging stuff up in there.

Yesterday my son was home sick with strep throat — contagious, but not really feeling or acting sick. So it was a weird day — he couldn’t play with any friends, and I had to be careful about where we went, but he was feeling fine enough to antagonize his little brother nearly all day. I kept him busy in the morning with some gardening jobs: I asked him to fill some pots (that I got from the online yard sale also) with soil so I could transfer the last of my seedlings outside. He complained, but then he ended up getting inspired to plant his cat grass seeds. All the recent rain has spurred a lot of growth in the garden. I see the sunflowers coming up, and something unidentified sprouted in the onion container, probably seeds from the compost: 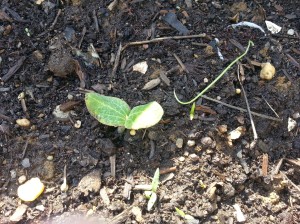 In the afternoon we ran some errands. Most of them were downtown: dropping off clothes at the Nesting House, picking up fruit and tortillas at Sara’s Produce, and of course coffee at Wawa. If only some place sold (decent) cat food up there, I wouldn’t have had to go anywhere else. Someday…

Today is going to be busy. My oldest is supposed to be in the school talent show, so he and his friends have to practice after school. Then he has a baseball game at 6 pm. Right now I need to make a gravy for dinner tonight. After a couple days of doing outside stuff, today I need to clear off my desk, pay bills, look up some stuff online, etc. It’s sunny out, but chilly. If I have time I’ll go over to the Sherwin Williams store and stare at the paint chips for a while.