So I have been posting lots of items on our town’s Facebook yard sale page, and making out fairly well. Over the past week I have sold a large metal tray, a never-used Pampered Chef apple peeler/slicer/corer, a guinea pig cage (yes, the last one died), two nearly full bottles of perfume, and a Big Top Cupcake pan. This brings my total earned to $55. Not bad considering it takes me like two minutes to take a picture and post it. People come to my house, give me money, and take away stuff I don’t want. It’s beautiful.

My husband thinks I am underpricing items, but I just want them gone, and I don’t want anybody bitching about the condition they’re in. For $3 to $8, you can’t bitch.

The kitchen decluttering challenge continues. Most recently, I did the junk drawer. The articles on the site that I’m following are helpful and have got me thinking about the kitchen in new ways. I moved the napkins and salt and pepper shakers closer to the kitchen table. I’m going to make the cereal and some nonbreakable bowls and cups accessible to the kids. I’d like to get a magnetic strip for the backsplash to store the knives on, because the knife block is bulky and I always forget which knife is in which position.

I’ve also been making a real effort to keep the counters, kitchen table, microwave top, and cart top clear of clutter. I definitely feel more at peace when they are visually pleasing (and ready to be used for cooking). There was an article making the rounds recently about how clutter is linked to depression — one can cause the other and vice versa. Makes perfect sense to me.

On Friday, I started going through a bin of stuff I had packed away when we remodeled our bedroom. An old purse was in there — my old warhorse, the one I used when I worked in the city. Big purse that was always crammed full of stuff — tissues, a whole pharmacy, a little planner/notebook, hand lotion, 15 or so pens, receipts, paint color cards, a Swiss Army knife. You know, very important stuff.

Tangent: One time I was at the county courthouse for something and got stopped going through the metal detector because I had not one but two pairs of scissors in my purse. I couldn’t even tell you why.

Anyway, in cleaning out this purse I found some lists of plans and goals — those are always funny to read after the fact — some BoxTops, about 18 different store “rewards” cards, aaaand … $42!

Ah, it pays to declutter. 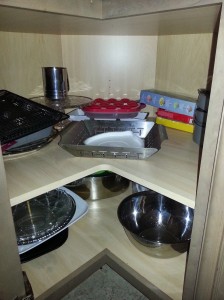 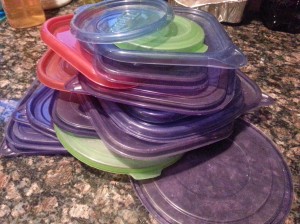 Update, Sunday morning: We had listed my husband’s Bowflex on craig’s list for $200. I had an interested buyer who was supposed to come this morning at 11, but with all the freezing rain going on, I figured he wouldn’t show. Well, he did, he paid me, and he loaded it up all by himself. Cha-ching 🙂

One response to “Everything Must Go”