So I’ve never read anything by Virginia Woolf. One of many gaps in my English major education. But she wrote the essay A Room of One’s Own, which is about women and writing and includes the concept that “a woman must have money and a room of her own if she is to write fiction.” I think any writer would agree that a room of one’s own is helpful for writing. Sure, some authors will tell you they wrote their masterpiece on the train going to and from their soul-sucking day job. Some even try to write on company time, when things are slow. (I mean, not me… I would never…) But to have a room solely dedicated to writing: this has always been my dream. I have had bedrooms of my own, in the past. Not lately. But a bedroom should mainly be for sleeping, if you want to sleep peacefully.

Back around 2004, when my husband and I were living in a different house, pre-marriage, pre-kids, I had a room of my own. It was allegedly the fourth bedroom of the house, but it was more like a large closet with a window, under an eave. (Eaf? Can eaves be singular? I don’t feel like looking it up.) I wrote a lot in that room. However, I made the mistake of painting it a vivid green, so I felt like I had crawled inside a peapod.

In our current house, I’ve tried a few times to lay claim to the third floor, which is a great space — peaceful, painted neutral whites and grays, good natural light — but then the whole pregnancy/infant thing got in the way. Later, my husband, the thieving bastard, developed insomnia and started sleeping up there, and now it’s infested with man cooties.

This past Sunday, I was on a cleaning bender in the yard/garage when I impulsively decided to clean up my husband’s old office. He had sheetrocked and finished our garage and made a separate room with its own door and window out of one corner, back when he thought the garage was going to be his business’s office. But he ended up deciding to rent an office in town instead. So I bagged up the papers and supplies he left behind in that room, swept out the dirt and spiders, and hung up a bulletin board I had been saving for this moment.

As the French say, waah-la:

My very own space.

The garage has a window air conditioner; in winter, I can use a space heater. Now I just needed a chair and a lamp. On Tuesday, my daughter and I went to the local Habitat for Humanity ReStore.

It was my first time there. They have lots of furniture, dishes, glassware, artwork, and other home goods, plus appliances, building supplies, paint, and more. I didn’t even make it into the back room where that stuff was. I got a lamp for $8 and a chair for $25. I have to go back and pick up the chair. The chair is not that aesthetically pleasing, but it’s comfy and the price was right.

So pretty soon I should be installed out there in my space. Then I will just have to force myself to, you know, actually write. Not sit there and daydream about painting the walls or finding a rug.

Tuesday was a great day for thrifting. In addition to the ReStore, I dragged my daughter to Goodwill, where I found a bike with training wheels for my younger son for $4 (needs the chain fixed; hubby assured me he “can fix anything”); soccer shorts, sweatpants and a rashguard for my oldest; and pants for my daughter. She also talked me into a $2 Wiggles guitar, which so far I haven’t smashed against the wall. (“Fruit salad! Yummy yummy!” Over and over.) 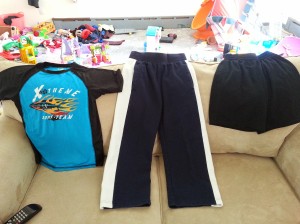 Last Friday my husband and I went out to dinner to have our Great Budget Summit. Basically, because our finances are mostly separate, we needed to compare notes; figure out how we were going to pay our 2013 income taxes, which were really high due to his business; and see if our no-spend September was working. I came out of the meeting depressed, mostly by the tax bill, which I think is going to kill any of the home improvement projects I wanted to do this fall/winter. Our attempts to cut back in September were mostly working, but in the face of that bill they seemed paltry. The bill, I’ve been assured, is an anomaly. But I still feel spurred to try to make big changes to the budget. I’m going to seriously look into getting rid of cable. I know a lot of people use Netflix, Hulu, Roku and other funny-sounding things to replace it for cheaper. I also am going to shop for new homeowner’s insurance. But the elephant in the room is the mortgage. I just quickly did the math, and although we technically are right below the cutoff (it’s supposed to be no more than 28% of your gross income), I think it’s too high for us, especially since only one of us earns that income. I’m going to be looking into refinancing, and I won’t rule out moving. Our house/property is still a little too big for us, and although it’s nice that the insomniacs, the writers, and the guinea pigs can all have their own rooms, I’m getting tired of paying the rent for all that space, not to mention the gas, oil, and electric bills.

One response to “Thrifty Tuesday and a Room of My Own”