Time to check in and see how much money I spent on Easter.

Kids’ clothes: Practically nothing. Every item they wore was a gift, a hand-me-down, thrifted, or bought used from eBay. My daughter looked cute. My sons could have looked nicer but that was because they gave me a hard time over wearing certain things and I gave in. But even the fancier clothes that went unworn fell into these categories.

I was lucky in that my mother bought my daughter’s dress a while back, but even if she hadn’t, there were plenty of cute dresses in the thrift shops and a million on eBay.

Easter baskets: I’d have to dig out the receipts, but I don’t think I spent very much. They received small baskets (that we already had) with candy, $5 each for the boys, and a container of sidewalk chalk for all three to share. They got plenty of other treats from their grandmother and aunt later on.

Gifts for relatives: I decided to bake and decorate cookies and to make brownie cake pops. I had all the ingredients/supplies already. This took up a lot of time on Good Friday and Holy Saturday. I.e., I was up pretty late Saturday night and was a zombie on Easter until I squeezed a nap in between family visits. But it was fun and they turned out pretty good. 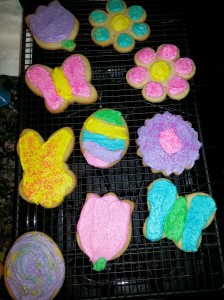 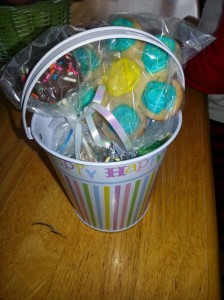 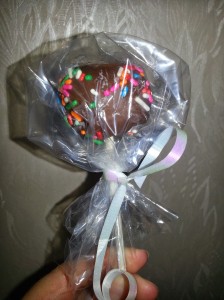 I need to invest in some cellophane for projects like these. It would look a lot better than baggies.

I made the mistake of joining the Shop Rite Couponers group on Facebook, which is run by Living Rich With Coupons, the site I use to find coupon-sale matchups. And those ladies (and gents) are posting pictures of receipts where they spend $10 and save $100. I probably should un-join that group. I don’t need that kind of pressure.

I think I really need to focus more on menu planning and what kinds of foods and ingredients can do double duty in any given week. Too bad I haaate menu planning. Too much commitment.

Things have been busy lately: Little League, taxes, the bedroom renovation, Easter. Last Monday, my daughter had to go to the ER (she’s OK). A dear family friend passed away on Good Friday, and her funeral was today. Monday, a little stray dog found us and we took it in for a night before taking it to the shelter. It was a real circus adding a dog to the mix of kids, cats and guinea pigs, not to mention the neighbors’ dogs.

So meals and meal planning have fallen by the wayside a bit. Not too much takeout, but a lot of chicken nuggets and mac n cheese. That’s what we had tonight, so to redeem it, I tried a new recipe for carrots, Brown Sugared Carrots, in hopes the kids would eat them.

Here’s what they looked like in the beginning. Mmmm, they smelled so good. One of the Food Rules is “Eat your colors,” and I love orange: carrots, sweet potatoes and pumpkins.

By the end they were rather browned, so the kids thought they looked “disgusting” (baby girl), so I ate them all. So good. 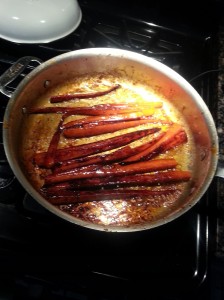