Bad news: My homemade dishwasher detergent has started to leave a film on the glasses so we stopped using it. After doing more research I realized that virtually everyone who has tried this stuff ends up with this problem. And apparently it’s also possible for homemade detergent to damage the dishwasher itself. So this might be a case where the dishwasher/dishwasher detergent industry knows best. The Cascade gelpacs do work really well, but they are about 25 cents each, so I might keep experimenting to see if I can find a recipe/system that is cheaper. (Makes me wonder if washing by hand would be simpler and cheaper…) As far as environmental concerns, the big concern with dishwasher detergent was phosphates, but they were banned in 2011. (Read about that here.)

In short, dishwasher detergent is a much more complicated subject than I ever dreamed, and I’m going to back off for now because the sheer number of blog posts devoted to the subject made my head spin.

Last night, still giddy from the success of my Mexican rice, I tried homemade Rice-a-Roni using this recipe. Yum! So good and easy. My husband thought it was not salty enough, but to me that’s just evidence of how his taste buds have been brainwashed by processed foods. 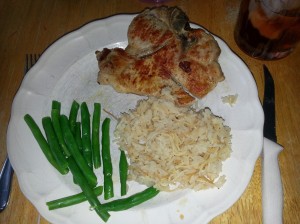 Finally, we also have been trying out organic milk and butter. The butter (Stonyfield) is so yellow and has so much more flavor that again (like the tomatoes from my garden), I’m suspicious of it. I feel like they did something to it, like it couldn’t possibly be that good (and yellow) naturally.